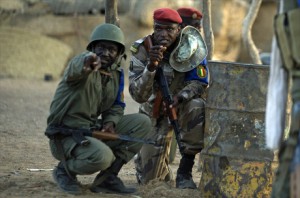 Mali’s army has arrested Alaye Bocari, a leading financial supporter of an Islamist militant group, responsible for an expansion of deadly attacks in the West African nation, military and defence sources said on Monday.

The attacks carried out by the Massina Liberation Front (MLF), led by radical preacher and jihadist Amadou Koufa, have helped shift Mali’s three-year-old Islamist conflict from the remote desert north ever closer to its populous south.

Bocari is among Koufa’s close collaborators according to intelligence gathered by the military, said army spokesman Colonel Souleymane Maiga.

“He was arrested on November 13 in the region of Mopti by an army patrol acting on information given by the population,” he said.

The arrest, one of around 30 carried out so far during an army operation launched late last month, was confirmed by a defence ministry spokesman who declined to give further details.

However, some analysts warned that there were still signs of worsening insecurity in the central region and further east near the border with Burkina Faso and south towards Ivory Coast.

“Either the Malian government is overstating the importance of the figures they arrest, or these networks are more durable than the government has indicated,” said Andrew Lebovich, visiting fellow with the European Council on Foreign Relations.

France intervened militarily in its former colony in 2013 to drive back Islamist militants who seized the north a year earlier, creating what Paris feared could become a base for attacks on Europe. The French military operation drove the fighters from major population centres.