You are here: Home / Africa / Mali: Al Qaeda spread a video with a colombian nun hostage 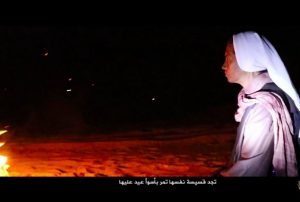 Al Qaeda‘s branch in Mali has posted a video with a Colombian missionary who has been held hostage for nearly a year, the Associated Press reported.

In the video, Gloria Cecilia Narvazez turns to Pope Francis.

The nun was captured near the border with Burkina Faso and was held hostage from 7 February. A video with her and five other hostages was circulated in July before a visit of the French president in Mali, AP reminds.

In the record, released on Monday, Narvaze spoke to her family and the head of her mission.

A spokesman for Nusrat al Islam Muslimeen advises the family to donate money to secure her release, suggesting that the other released hostages have donated funds through independent charities.