You are here: Home / Africa / Mali: Al-Qaeda and Islamic State-affiliated groups are cooperating 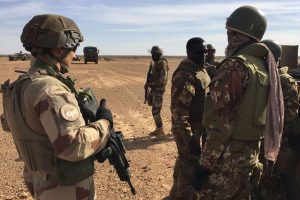 Islamist militant groups in West Africa’s Sahel region are using increased support from al-Qaeda and Islamic State and enhanced cooperation among themselves to carry out more sophisticated and deadly attacks, according to the chief of United Nations mission in Mali, like reported by bloomberg.com.

“When we examine the explosives, the types of mines, shells and weapons they use, our experts tell us that a fairly advanced level of expertise is required that they didn’t have before,” the UN special representative in Mali, Mahamat Saleh Annadif, said Friday in an interview in the capital, Bamako.

The militant groups are operating across a semi-arid region stretching along the southern end of the Sahara from Mali to Nigeria. France has almost 4,000 soldiers in the region, and the U.S. has troops in Niger and is building a drone and airbase in the northern city of Agadez. The UN has more than 13,000 members in its Mali mission, which suffered the greatest loss of life of any of its peacekeeping operations last year.

Despite the increased military involvement by foreign powers and West African armies, the violence shows no sign of abating. The militant’s outside support is probably coming through Libya, Annadif said. They also have acquired funds from kidnappings and trafficking of drugs and migrants seeking to reach Europe.

A group known as the Islamic State in the Greater Sahara claimed responsibility for an attack in October on a joint patrol of U.S and Nigerien forces in which four U.S. soldiers were killed. It mostly operates near the borders of Mali, Burkina Faso and Niger, Annadif said.

The Group for the Support of Islam and Muslims, an affiliate of al-Qaeda formed last year by four local groups and known by the acronym JNIM, operates in northern and central Mali including in the towns of Kidal, Timbuktu and Mopti, Annadif said. The merger has “given an new impetus” to these groups and also explains the rising number of attacks, he said.

In Mali, militant groups have expanded their area of operations, increasingly targeting more populated central Mali. More attacks occurred in the central Mopti and Segou regions during the last three months of 2017 than in the five northern regions combined. Violence has also spread to neighboring Burkina Faso and Niger.

Attacks in Mali intensified in late January. At least 22 Malian soldiers were killed in five separate raids in north and central Mali between Jan. 25 and Jan. 31, prompting the army to impose a ban on motorcycles and pickups in some areas.

There’s also growing evidence that both al-Qaeda and Islamic State-linked groups in West Africa are now cooperating at the operational level and that there are connections with IS-affiliates in the Lake Chad region close to northeastern Nigeria, Annadif said.

Mali has been gripped by violence since ethnic Tuareg rebels began a separatist insurgency and joined forces with Islamist militants to seize control of the sparsely populated north in 2012. While a 2013 French military intervention prevented the insurgents from marching southward to the capital, jihadists resorted to attacking Mali’s military and the UN peacekeeping force that arrived after the French operation.

Militants used to mainly carry out hit-and-run attacks and bombings but are now also carrying out more complex assaults. As many as 26 civilians died when their bus hit a landmine near the town of Boni in central Mali, on Jan. 25. The mine was meant for UN peacekeepers patrolling in the region, according to Mali’s Security Minister, Salif Traore.

Delays in implementing a 2015 peace deal between Mali’s government and insurgents in the north have left a stalemate in which militants can easily recruit young fighters, Annadif said. Last month, the UN Security Council threatened to impose sanctions on the parties blocking the implementation of the accord.

“The main clauses of the accord aren’t implemented, which means that all the hopes placed on the accord have started to wane,” he said. “Many youth, who were part of armed groups and who accepted the ceasefire after the accord was signed, found themselves with a lack of guidance and have fallen prey to terrorists.”