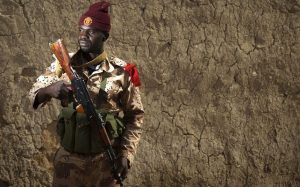 A Malian army spokesman says armed men have attacked an army camp in the country’s north, killing at least four soldiers and wounding another, like reported by ap.org.

Lt. Col. Diarran Kone on Tuesday would not give more details about the attack in Gourma-Rharous, about 160 kilometers (99 miles) south of Timbuktu.

A local official said the assailants destroyed about six armed vehicles but left after failing to take control of the camp. He spoke on condition of anonymity because he was not permitted to speak to reporters.

The town of Gourma-Rharous has been targeted regularly by Islamic extremists in the region. No one has yet claimed responsibility for this attack.

Mali’s north was occupied by al-Qaida-linked jihadists in 2012, and despite being pushed out in 2013 such attacks continue.