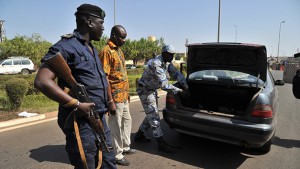 Three suspects considered to be the “masterminds” of recent terrorist attacks in Mali were arrested by Malian special forces over the weekend in Bamako, a security source revealed on Monday.

The three were suspected of having organized attacks against the camps of the UN Mission in Mali (MINUSMA) and two security posts in Bamako and Baguineda.

A statement released by Mali’s General Directorate of State Security (DGSE) said Hassan Dicko, alias Abou Leila, Ayouba Sangare and Ali Sangare were part of the terrorists who attacked MINUSMA camps in Bamako as well as the Baguineda National Gendarmerie brigade on Aug. 8, 2015.

They were also behind last week’s threats against some journalists, DGSE said.

A statement released last week by a group calling itself the Guardians of Jihad threatened to kill all “foreign journalists in Mali as well as all journalists working for foreign media.”

According to Mali’s intelligence service, Hassan Dicko Abou Leila, born in 1980, is the second in command to Macina Liberation Movement’s leader in Bamako, Amadou Koufa.

Ali Sangare, born in 1980, is a taxi driver who facilitated the transportation of attackers of the Burkina Faso’s MINUSMA contingent in the Malian capital, DGSE said.

Ayoub Sangare, born in 1982 and originally from Cote d’Ivoire, was in charge of logistics and purchase of weapons. A search at his home led to the seizure of a lot of weapons and grenades, DGSE concluded.