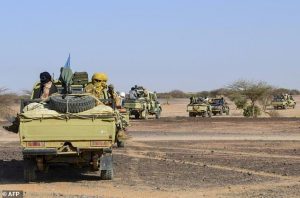 Three members of an armed pro-government group were killed Saturday by suspected jihadists in northern Mali, security sources said, a day after extremists freed two hostages held since July in the troubled region, like reported by dailymail.co.uk.

Jihadists continue to roam the north and centre of the African country, despite being ousted from key northern towns by an ongoing French-led military intervention in 2013.

“Three members of the GATIA group were killed by terrorists in the vicinity of Anderamboukane, near the border with Niger,” a Malian security source told AFP, requesting anonymity.

The guerrilla group was working with the Malian army to secure part of Mali’s north, said a local administrative source who confirmed the death toll.

“The GATIA fighters had taken control of an area of Anderamboukane that the terrorists came and attacked,” the source said.

GATIA, (Imghad and Allies Tuareg Self-Defence Group) which supports the central government in Bamako, signed a 2015 peace deal with members of the country’s former rebel alliance that is aimed at quelling uprisings in the north, but both sides have repeatedly violated a ceasefire.

A 2012 rebellion by the Tuareg-led rebels was hijacked by jihadists linked to Al-Qaeda who then seized control of key northern cities, triggering the international military intervention the following year.

A retired soldier and a Malian civilian who were taken hostage last July by Islamists were also freed on Friday in the Timbuktu region in Mali’s northwest, a local government representative told AFP.