You are here: Home / Africa / Mali: 23 killed in Islamist attacks 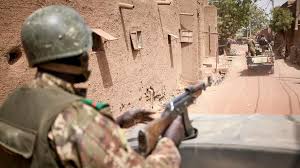 Twenty-three people were killed in central Mali in a series of attacks early Tuesday, officials said, in the deadliest ambush since military officers seized power in August.

Overnight, militants raided a military outpost in the central town of Sokoura, near the border with neighbouring Burkina Faso, killing nine soldiers, the army said in a statement.

Reinforcements sent to the outpost were ambushed and hit a roadside bomb later on Tuesday morning, the statement added, giving a provisional tally of two soldiers killed and 10 wounded.

An earlier army statement said that three soldiers had been killed in that attack.

A police and humanitarian official said that 12 civilians travelling in a minibus to a weekly market in the central town of Bankass were also caught up in this attack.

“Twelve civilians including two women and a baby were killed,” the police official said.

He added that they had “followed the army reinforcement”, believing themselves to be protected, but were then targeted along with the soldiers.

Details of the attack remain hazy.

A government official based in the region, who declined to be named, said that the civilians happened to be travelling ahead of the military convoy when they were caught in the crossfire.

The attacks come just days after the release of French aid worker Sophie Petronin, who had been held captive in northern Mali by the al-Qaeda-affiliated GSIM group.

The interim government in Bamako released some 200 prisoners to secure her release, as well as the freeing of two Italian hostages and Malian opposition politician Soumaila Cisse.

Mali has been struggling to contain a jihadist insurgency that first emerged in the north of the country in 2012, and has since spread to the centre of the country and neighbouring Burkina Faso and Niger.

Thousands of soldiers and civilians have been killed in the fighting to date, and hundreds of thousands of people have been forced to flee their homes.

On Tuesday, Mali’s military said that “13 terrorists” were killed and that warplanes destroyed two vehicles. It added that it was still trying to determine the definitive death toll from the attacks.

Anger at Mali’s brutal conflict contributed to protests against president Ibrahim Boubacar Keita this year, which culminated in his ouster in a bloodless military coup on August 18.

An interim government — which is set to govern for 18 months before staging elections — was sworn in on September 25.

Civilian Bah Ndaw is serving as interim president, while the head of the military junta Colonel Assimi Goita is his vice president.

The presence of military officers in the upper echelons of Mali’s government appears to have done little to stem the flow of attacks.

Militants have killed 175 Malian soldiers over the past six months, according to the United Nations.

And last week, suspected jihadists slaughtered five villagers in the central village of Farabougou. About 10 villagers were also kidnapped in the turbulent region on October 6.

During his first meeting with his government ministers on Friday, Ndaw said that “the enemy is known and victory is possible”.

“Failing an immediate victory in this war, which I know is long-term, we must win reassuring victories,” he said.