You are here: Home / Africa / Mali: 20 UN peacekeepers injured in major attack on MINUSMA base 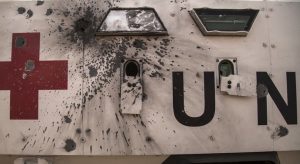 Some 20 UN peacekeepers serving with the UN Stabilization Mission in Mali, MINUSMA, were injured on Wednesday, after their temporary base came under attack in the restive central region of the country, like reported by northafricapost.com.

In a statement, MINUSMA said that the ‘blue helmets’ under fire were able to repel the attackers, who fled after delivering a “robust response”.

The base is located in an area of high jihadist activity, near Kéréna, in the vicinity of Douentza where the peacekeepers have been carrying out numerous security operations in recent months.

According to various sources, the wounded are part of the Togolese MINUSMA contingent and some of them are seriously injured.

The MINUSMA statement indicates that the “forceful response” of their soldiers managed to repel the assault and forced the assailants to flee, leaving no casualties among the enemy.

Although the perpetrators of the attack are unknown, the modus operandi appears similar to that used by the Defense of Islam and Muslims Group (Jnim in Arabic), a staunch ally of the Al-Qaeda terrorist group.

According to Spanish news outlet atalayar.com, last Sunday, this affiliate once again called on its troops to focus their attacks on Chadian MINUSMA soldiers. Moreover, they claim that their attacks on peacekeepers occur almost daily and that the number of casualties is much higher than official sources report.

The MINUSMA mission has become the deadliest mission in the world, according to the UN itself. Five peacekeepers died in one week during attacks in mid-January. Since 2014, date of the mission creation, 225 people have been killed by the continuous attacks orchestrated by the various jihadist groups in the region. They often use booby traps, bombings of their barracks or road ambushes.

Mali, like the other regions of the Sahel – a transitional zone spanning the space between the Sahara Desert in the north and the Sudanese savannah in the south – has seen a worrying increase in the number of attacks by both Al-Qaeda affiliates and the self-styled Islamic State, which has further increased inter-communal violence and the displacement of tens of thousands of people.

The Malian Government has been seeking to restore stability and rebuild the volatile country’s institutions following a series of setbacks since early 2012 that fractured the country, including a failed coup d’état, renewed fighting between Government forces and Tuareg rebels, and the short-lived seizure of its northern territory by radical extremists.

Last year military leaders staged a coup, and in September, agreed to establish a transitional Government for a period of 18 months, promising fresh elections and a return to civilian rule.