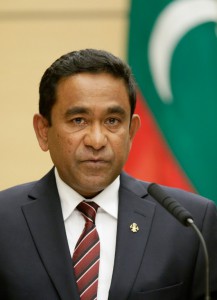 A private television station was raided on Friday by Maldivian police in connection with an alleged IS video posted on YouTube that threatened to kill President Abdulla Yameen and other senior officials, days after a state of emergency was declared in the island nation.

Ibrahim Waheed, managing director of Sangu TV, said that the channel was stopped from broadcasting as the police searched its studios in the capital in a pre-dawn raid. The police seized hard disks from 27 computers and destroyed a safe at the office, Minivan news agency quoted Waheed as saying.

According to the court warrant, the police were seeking evidence related to the “video message uploaded to YouTube threatening to kill the president of the Maldives and senior officials of the state and to carry out terrorist attacks”.

The video was posted by a user called ‘Slavery slave’ with the Islamic State’s (IS) logo in the corner. The man threatened to launch terrorist attacks against the tourism industry within 30 days if the government does not comply with it demands that include withdrawal new anti-terrorism legislation.

Waheed said he was certain that Sangu TV’s staff and management would not have uploaded such a video. He said police officers “turned the office upside down” and had told the station’s staff not to answer phone calls during the raid. According to Sangu TV, the police had also turned off security cameras in its offices and left the station “in a crippled state”.

The raid comes after President Yameen declared a 30-day nationwide state of emergency on Wednesday, citing threats to national security and raising fears of imminent attacks. Yameen issued a decree suspending several fundamental rights, including the right to freedom of assembly, and granting the police sweeping powers to arrest suspects and carry out raids.

Adeeb was arrested on October 25 after his return from an official visit to China for allegedly orchestrating the September 28 blast when President Yameen and First Lady Fathimath Ibrahim were returning home after performing Haj. The president escaped unhurt, but the first lady suffered a spinal fracture and is still in hospital. However, the FBI that investigated the blast said it found no evidence that it was caused by a bomb.