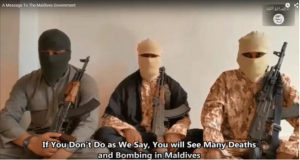 In an ISIS video released on 31 August on social media, three masked men threatened to kill the president of the Maldives, Abdulla Yameen, and to unleash a terrorist campaign on the islands, one of the world’s most sought-after holiday destinations.

The group are demanding the release of opposition leader Sheikh Imran Abdulla, who was arrested in May following anti-government protests. So far the video’s authenticity remains unconfirmed.

Abdulla was accused by the government of inciting violence among protesters, who were demanding the resignation of the president over the imprisonment of former president Mohamed Nasheed and other political leaders. Abdulla aimed to overthrow the government and “called for clashes with the police if necessary,” according to reports in the Guardian newspaper.

In the video the men threatening to bomb resorts. The threat of terrorism could seriously undermine the country’s tourism industry, which would be disastrous for the local economy.

The Maldives in the Indian Ocean is sold has a holiday paradise to the world’s wealthy. In 2014, Prince William and Kate Middleton rented out the five-star Cheval Blanc Randheli resort on the Noonu Atoll, on the northwest of the Maldives archipelago.

Famous for its pristine, palm-fringed beaches and warm, azure waters, it is a top destination for luxury, long-haul tourism but that could soon change in the event of attacks, in the same way as Tunisia – popular with package tourists from Europe – has been targeted by Islamic militants.

This could be a hammer blow to the islands’ economy that is heavily dependent on tourism, which accounts for 28% of the economy and more than 60% of foreign exchange. All of the island’s infrastructure development is led by tourism revenues.

The video is the latest and most high profile action by Isis on the archipelago’s 1,200 atolls, but Islamists have been active here for some time and many jihadis have left to fight in Syria. It is estimated that between 50 and 100 of the country’s 300,000 strong citizens have so far left to pursue jihad.

The threat of terrorism is not solely a domestic issue. The first departures of Maldivians to Syria were reported in 2013 and so far at least five citizens have been killed there. There are fears that they could travel further afield; several countries, including the UK, do not require entry visas from Maldives residents.

“There are serious concerns,” said one western diplomat in the region. “The risk is either of an attack locally or someone coming to Europe or even going on to the US.”

Endemic poverty and deprivation may be behind local radicalisation. Some of those travelling to Syria came from poor fishing communities on outlying islands; others came from the capital which features a mix of radical preaching, organised crime and social deprivation.

Democratic elections in 2008 ended three decades of autocratic rule, but have brought political instability in their wake. The World Bank has blamed the ease with which criminal gangs have recruited young Maldivians on “inactivity and apathy, unemployment, drug use and “the need for young men to prove their masculinity”

Violent attacks on so-called secular activists in the Maldives have been blamed on radicalised gang members. One blogger was badly injured in 2012 and a moderate cleric and parliamentarian stabbed to death outside his home. Gang members last year threatened local activists who ran blogs and Facebook pages calling for tolerance for homosexuals, and last August local journalist Rilwan Ahmed Abdulla was abducted and has not been seen since.

“Ahmed’s abduction was related to this radicalisation of the gangs. He was exposing and angering them. First they threatened him, then they disappeared him,” said Rilwan Moosa, brother of the journalist.

Moosa believes people in the west should pay more attention to local troubles. “This place is more dangerous than they think. It is becoming highly radicalised. This is not a paradise on Earth any more,” he said.