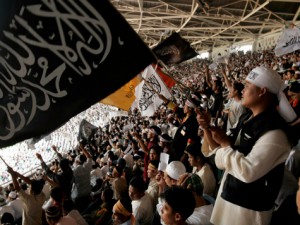 The recent emergence of an ISIS recruitment video featuring young Malay-speaking (and possibly also Indonesian) boys attending religious classes and engaging in weapons training in ISIS-held territory has caused a furore in Malaysia. Estimates of the number of Malaysian fighters in ISIS – the Islamic State in Iraq and Syria militant group – vary from 60 to almost 150. The high end of these figures approximates the number of Indonesian fighters believed to be in Syria and Iraq. Yet the population of Malaysia is barely one-tenth that of Indonesia. In other words, Malaysians seem to be joining ISIS at a higher rate than Indonesians are.

This state of affairs is all the more perplexing, given how often Malaysian Prime Minister Najib Razak waxes lyrical on the international stage about moderation and how Malaysia is the epitome of multi-ethnic and inter-religious harmony, as he continues to press a nebulous “Global Movement of Moderates” agenda. What accounts for the appeal of ISIS in “moderate” Malaysia? To answer this question, let us start with the official Malaysian view on the causes of international terrorism, especially religiously motivated terrorism.

Malaysia’s Muslim leaders have frequently singled out US foreign policies that affect the Muslim world – particularly the invasion of Iraq, Washington’s unstinting support for Israel, lack of sympathy for the Palestinian cause, and war in Afghanistan – as one of the main causes of terrorism today. To be sure, much can be said about how these factors have inflamed Muslim sentiment worldwide. But my intention here is to look at the challenge that religiously inspired terrorism in general, and ISIS in particular, poses for Malaysia. To that end, I argue that while “external factors” are important, the main causes for concern may well originate within Malaysia’s own borders.

Four observations can be drawn from the Malaysian domestic context, which I believe speak to the conditions that exist for virulent ideologies like that of ISIS to potentially find sympathy and a following. First, in the 2013 Pew Global Attitudes Survey, it was noted that “in Malaysia… roughly a quarter of Muslims (27 per cent) take the view that attacks on civilians are sometimes or often justified”. However, if we add to this number the 12 per cent who take the view that violence is “rarely justified” in defence of Islam (as opposed to never justified), essentially 39 per cent of the Malaysian Muslims surveyed believed that violence can be justified against enemies of Islam. Significantly, Indonesians polled only 18 per cent on the same question (1 per cent, “often”; 5 per cent, “sometimes” and 12 per cent, “rarely”).

In another 2013 poll conducted by the Pew Research Centre, “The world’s Muslims: religion, politics and society”, a mere 8 per cent of Malaysians expressed concern about Muslim extremism while 31 per cent were concerned about Christian extremism.

Reading this survey, I could not help but come away with one thought – 39 per cent of the Malaysian Muslims surveyed believed that violence can be justified against enemies of Islam. What is the relevance of the figures in the Malaysian context? I will return to this in a moment. Second, Islam has unfortunately become heavily politicised in Malaysia. Malaysia’s dominant political party, Umno, is a Malay-Muslim party that was created with the main objective, at least in theory, of promoting and defending Malay-Muslim supremacy.

According to the party’s narrative, this supremacy is coming under siege from various cultural (read: non-Malay vernacular education) and religious (read: non-Muslim) quarters and hence has to be staunchly defended.

Given that Malaysia has a Malay- Muslim majority population, it should come as no surprise that Umno’s chief political opponents are also Malay-Muslim parties which equally brandish religious credentials as a source of legitimacy. Let me be clear: Islam casts a pale shadow over Malaysia today not because it is Islam, or even Islamism per se, but because its proponents (and “defenders”) are articulating a particularly exclusive brand of Islam that is divorced from the religion’s historically enlightened traditions, and which has no intention to encourage pluralism or compromise.

The net effect of this is that non-Muslim Malaysians are marginalised as Islamist parties try to “out-Islam” each other. As Umno struggles to cling to power by focusing on its religious credentials above all else, religion has become heavily politicised and is viewed as a zero-sum game.

Third, this politicisation of Islam is taking place against a backdrop of an exceedingly strong state which has taken it upon itself to police Islam and curtail any expression of faith that departs from the mainstream Shafi’i tradition. Yes, the ummah may be universal and Islamic confessional traditions may be diverse but, in Malaysia, there is very little room for compromise beyond the “Islam” sanctioned by the state.

The Shi’ite tradition is legally proscribed, and several smaller Islamic sects are deemed deviant and, hence, banned. All this happens despite the existence of constitutional provisions for freedom of worship.

Fourth, rather than extol the virtues and conciliatory features of Islam’s rich tradition, many Malay-Muslim political leaders have instead chosen to use religion to amplify difference, to reinforce extreme interpretations of Malay-Muslim denizen rights, and to condemn the “other” (non-Muslims) as a threat to these rights.

For fear of further erosion of legitimacy and political support, the Malay- Muslim leadership of the country has in its public statements circled the wagons, allowing vocal right-wing ethno-nationalist and religious groups to preach incendiary messages against Christians and Hindus with impunity. In extreme cases, they have even flippantly referred to fellow Malaysians who are adherents of other religious faiths as “enemies of Islam”.

Even state-sanctioned Friday sermons have occasionally taken to referring to non-Muslim Malaysians as “enemies of Islam”. Against this backdrop, the findings of the Pew surveys cited earlier take on a greater, more disconcerting meaning.

Of course, not all in the Malay-Muslim leadership engage in this kind of narrow religio-political discourse. I know that a few of them privately sympathise with non-Muslim consternation about how the right to freedom of religion is being blatantly undermined. The problem is, they dare not speak out publicly, thus creating the impression that they support the majoritarian narrative of exclusion of non-Muslims.

So how is all this related to ISIS and Malaysia’s concern for the group’s growing influence on its shores? My point is this – is it any surprise, given the four observations enumerated above, that the climate of religio-political discourse in Malaysia today would lend itself to the pull of extremist ideas of a group such as ISIS?

To be sure, Malaysia has a very competent internal security apparatus. But security measures alone are insufficient to deal with the threat the country currently faces. Indeed, without changing the way Malaysian society views and articulates Islam to allow for critical engagement of extremist ideas, the utility of security measures is limited at best.

Worse still, they might end up feeding an extremist mindset. While critical engagement will not eradicate the problem, I believe it will go some distance in reducing it.

But in order to set a new tone for public discourse on Islam, pluralism and critical engagement of extremist ideas, it will require political will and leadership at the very top.

The Malay Mail reported recently that Malaysia’s top counter-terrorism official opined that an ISIS attack on Malaysia “was just a matter of time”. If so, the Malaysian authorities would be well advised to consider that the appeal of ISIS may not be attributed to developments in Syria or Iraq, or US foreign policy in the Muslim world alone. It could well start at home, where the political and social climate that allows exclusivist right-wing groups and politicians to speak and act with impunity is the same one that will provide recruits and sympathisers for insidious organisations such as ISIS.
Read more at http://www.thestatesman.com/news/opinion/malaysia-s-isis-dilemma/60164.html#DzOCkMAmSIEEHLfA.99