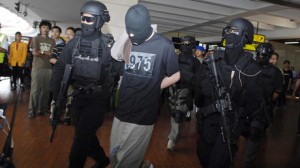 Malaysian authorities have arrested three people including a Syrian and an Indonesian national on suspicion of planning terror attacks against domestic and foreign targets, police and news reports said Friday.

The announcement came a day after the U.S. and Australian embassies had warned their citizens to avoid a popular Kuala Lumpur tourist area on Thursday due to an unspecified security threat.

The statement did not specify their nationalities, but Malaysian news outlets quoted Noor Rashid later telling reporters they were a Malaysian, a Syrian and an Indonesian.

The police statement said one of the foreigners had traveled frequently to Yemen.

On Thursday, the U.S. and Australian embassies warned citizens to stay away from Jalan Alor, an outdoor dining strip in central Kuala Lumpur that is packed nightly with foreigners and locals.

Malaysian news outlets quoted Noor Rashid saying the arrests were related to the Jalan Alor threat, and that the detainees were taken into custody on Thursday.

“The operation is a result from information obtained from suspects arrested previously,” the police statement said.

Muslim-majority Malaysia practices a moderate brand of Islam and has not seen any notable terror attacks in recent years.

But concern has risen in the multifaith nation over growing hard-line Islamic views and the country’s potential as a militant breeding ground.

Authorities say dozens of Malaysians have traveled to Syria to fight for the radical Islamic State group in its civil war there, and warn they may seek to return home and import its ideology.

Over the past year, police have arrested numerous suspects whom they say were IS sympathizers plotting attacks.

Last month, police said 10 Malaysians were arrested for fostering suspected links with the Islamic State and planning attacks in the country.

Opposition lawmakers, however, say the terror arrests over the past year have been shrouded in secrecy, making it difficult to gauge the actual threat level.