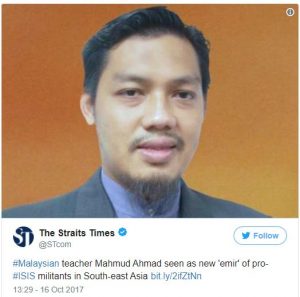 A malaysian former university lecturer who went on to become one of Southeast Asia’s most wanted militants looks set to become head the Islamic-State inspired Maute rebel group in the Philippines following the deaths of its two top leaders in early Monday morning.

According to Malaysian daily The Star, Dr Mahmud Ahmad, is a highly regarded individual among the Abu Sayyaf Group (ASG), an affiliate of IS, and is within the ranks of leader Isnilon Hapilon and Omarkhayam Maute who were killed in a military raid.

Sources told the paper that Dr Mahmud is a weapons expert with wide knowledge in the IS brand of militant jihad. He also gained the respect of the ASG after fleeing the Philippines in 2014.

“You could say he is a sort of decorated veteran among the IS and ASG ranks,” a source was quoted as saying.

Another source said Dr Mahmud managed to unite ASG, the Maute Group led by Khayyam Romato, Bangsamoro Islamic Freedom Fighters and Ansarul Khilafah Philippines under umbrella banner of the IS.

“It is very alarming that this one individual is the glue tying these different factions together,” the source said.

Other experts and officials told Reuters the battlefield deaths of the two leaders in Southern Philippines could thrust Mahmud Ahmad, who trained at an Al-Qaeda camp in Afghanistan as the militant group’s new regional “emir”.

Intelligence officials describe Malaysian Mahmud Ahmad as a financier and “recruiter, who helped put together the coalition of pro-Islamic State (IS) fighters that stormed Marawi City in May.

Isnilon, Islamic State’s anointed “emir” in Southeast Asia, and Omarkhayam, one of two Middle East-educated brothers at the helm of the militant alliance, were killed in a raid on a building in Marawi and their bodies recovered on Monday, Philippine Defence Secretary Delfin Lorenzana said.

Philippine authorities said they were still searching for Mahmud.

“Based on our information, there is still one personality, Dr. Mahmud of Malaysia, and he is still in the main battle area with some Indonesians and Malaysians,” military chief, Gen. Eduardo Ano, said on Monday. “But their attitude is now different, they are no longer as aggressive as before.” He did not elaborate.

Ano urged the 30 militants remaining in a shrinking combat zone to surrender and free hostages as troops stepped up their fight.

Abdullah Maute, the alliance’s military commander, was reported killed in August, though no body was found.

Malaysia’s police counter-terrorism chief Ayob Khan Mydin Pitchay told Reuters in July that Mahmud “managed to sneak out from Marawi city to another safe place with his followers”.

The 39-year-old Mahmud, who holds a doctorate in religious studies and was a university lecturer in Kuala Lumpur, was Hapilon’s second-in-command in the IS’s Southeast Asia “caliphate”, according to a July report by Indonesia-based Institute of Policy Analysis and Conflict (IPAC).

Sitting in the inner circle of the Marawi command centre, Mahmud controlled recruitment and financing, the IPAC report said.

He was the contact for foreigners wanting to join the fight in the Philippines or with IS in the Middle East, it said.

“It wasn’t just Indonesians and Malaysians contacting Dr. Mahmud … he was also the contact for Bangladeshis in Malaysia who wanted to join the fighting in Mindanao,” IPAC’s director Sidney Jones told Reuters.

Rohan Gunaratna, an analyst at the S. Rajaratnam School of International Studies in Singapore, described Mahmud as “the most important IS leader in Southeast Asia”.

Ahmad El-Muhammady, a lecturer at the International Islamic University of Malaysia (IIUM) and a counter-terrorism advisor to the police, said Mahmud often solicited funds for IS operations.

“He’s always the one asking people “does anyone have any money they’d like to donate?”, and he will usually reply when followers in the region ask him about the situation in the Philippines,” Ahmad said.

Mahmud grew up in Batu Caves, a crowded Kuala Lumpur suburb, famous for a Hindu temple housed in a large complex of caverns. Mahmud’s wife and three children were last known to be living there, although Reuters could not locate them.

Before leaving Malaysia in 2014, Mahmud taught young Muslim students at a tahfiz, a school to memorise the Koran, in Nakhoda, a village near Batu Caves, residents said. “When he (Mahmud) started the school, he did stay there for the first one or two years, but then he just disappeared,” said 50-year-old Zainon Mat Arshad, a Nakhoda resident who went to the mosque where Mahmud prayed.

“When he was at the tahfiz school, he kept mostly to himself and if he had come over to pray on Friday, I don’t think anyone would have recognised him,” said Zainon. “He didn’t mingle with the local community.”

Security experts say Mahmud studied at Pakistan’s Islamabad Islamic University in the late 1990s before going to Afghanistan where he learned to make improvised explosive devices at an al Qaeda camp.

In 2000, he returned to Malaysia to get a doctorate, which earned him a post as a lecturer in the Islamic Studies faculty at the University of Malaysia in Kuala Lumpur.

Former students described Mahmud as a quiet person who kept to himself.

“He wasn’t the kind of lecturer who hung out at cafes with his students as some others did,” said one former student, who declined to be identified.

The few signs of his militant beliefs were discovered later, including a book he wrote on jihad under his nom de guerre, Abu Handzalah, said Ahmad, the IIUM lecturer.

He was put on Malaysia’s most-wanted list in April 2014 after leaving the country with several others, including his aide, a Malaysian bomb maker named Mohammad Najib Husen, to work with the Abu Sayyaf group, notorious for violent kidnappings and beheadings in the southern Philippines, Ahmad said.

In a video released by the Philippines army in June, Mahmud is seen alongside Hapilon as well as Omarkhayam and Abdullah Maute – the pair of brothers who orchestrated the Marawi siege.