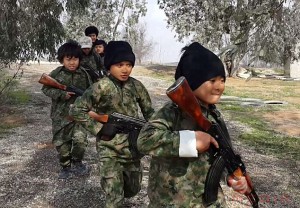 Investigations are continuing into details of the training camps, which are believed to be in Syria and Iraq, Bukit Aman Special Branch director Mohamad Fuzi Harun told reporters at a news conference in Kuala Lumpur.

“These children were brought in to the war-torn countries by their parents, who are raising them to be IS fighters,” he was reported as saying by The Star.

He added that 47 Malaysians had joined Islamic State, including 12 women, and that authorities were actively attempting to bring them home.

“But they have refused to come back. Their ultimate goal is to fight and die as martyrs,” he said.

Last month, Malaysian police warned that children as young as two were being trained overseas to become the next generation of terrorists.

Video was shown of children receiving military training and swearing allegiance to Islamic State and its leader.

At the time, a counter-terrorism official expressed fears that similar camps could be set up in Malaysia.