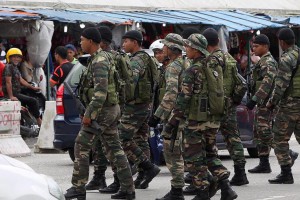 The Malaysian Armed Forces (MAF) is ready to deploy its assets to specific locations in the country to monitor attack threats by the Daesh militant group, if required by the National Security Council (MKN), said Defence Minister Datuk Seri Hishammuddin Tun Hussein.

He said the issue of Daesh-led terrorist attacks required careful discussions, and the need to involve military personnel should be decided by the National Security Council chaired by Prime Minister Datuk Seri Najib Tun Razak.

“In the fight against crime, military personnel have certainly worked with the police before, to conduct patrols under the National Blue Ocean Strategy, and the military’s cooperation with the police is not an issue.

“The decision to include members of the military to deal with Daesh threats is not ours to make, MKN will decide on that, we will wait for instructions and move according to the laws of the country,” he told reporters after attending the Ministry of Defence’s Roadmap Programme here, Sunday.

He was asked by reporters if MAF would mobilise its assets to monitor certain areas in the country, following the recent militant attacks in Jakarta.

Regarding the Daesh threat, Hishammuddin said the Defence Ministry had increased its preparedness through its Intelligence Corps and the MAF Anti-Terrorism Unit for quite some time now, and it was also cooperating with all security forces on the matter.

He said the ministry was also carrying out defence diplomacy with certain countries, as well as information sharing with countries that have long been facing threats from the militant group.

“It is not only us, but the whole world is also trying to deal with this Daesh threat. We must tackle this together, whereby relations with certain countries must be strengthened,” he said.