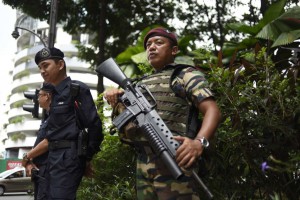 The nation’s security forces have succeeded in curbing and thwarting several attempts by the Daesh militant group to kidnap the country’s leaders including the prime minister, the Dewan Rakyat was told today.

“On Jan 30, 2015, a total of 13 individuals associated with the Daesh militant group plotted to kidnap the country’s top leaders including the prime minister, home and defence ministers,” he said.

Ahmad Zahid was responding to a question from Datuk Abdul Manan Ismail (BN-Paya Besar) who wanted clarification on the Royal Malaysia Police’s (PDRM) success in preventing terrorist attack by Daesh militants in the country.

Elaborating, he said besides the plot to kidnap, the group also planned attacks on places of worship and public places, steal firearms from army camps as well as robbing cash to finance their activities.

He said although there were no Daesh branches in the country, those influenced by the militant group ideology received instructions directly from the group in Syria led by Abu Bakar al-Baghdadi.

According to Ahmad Zahid, Daesh militant group activities in this country were evident throughout Sept 2014 to May 2015 and in that period, the security forces detected four plots by the group to attack several locations in Kedah, Kuala Lumpur and Putrajaya.

“Looking at the developments on this terrorist threat, we saw a need for an integrated and holistic action and to handle the situation, the Home Ministry and the police resorted to information-sharing cooperation with foreign intelligence agencies, particularly with ASEAN countries,” he said.

According to him, as a result of the cooperation, close monitoring was conducted to keep track of those involved with the militant group and names of individuals involved were extended to the Immigration Department to be put on the blacklist and suspects list.

He added that the Malaysian Communications and Multimedia Commission also monitored social media which had become the communication medium of groups influenced by Daesh.

He said the home ministry and security forces were actively tracking down elements of violence, increasing security and control at locations at risk of becoming targets such as tourist spots, embassies and government buildings, as well as building closer rapport with the public, encouraging them to report of any suspicious activity.