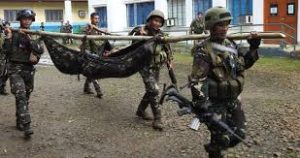 Police in Malaysia said that they shot dead five members of the Philippines-based Abu Sayyaf terror group during a raid.

The police in Sabah, a state in the Malaysian part of the island of Borneo, said the five were killed during a patrol at the same location where last week police arrested eight alleged members of the group, which has its stronghold across the Sulu Sea in the southern Philippines, reports dpa news.

“Our men knocked on the door of one of the squatter houses but were met with hostile gunfire, which we immediately returned,” said Sabah police commissioner Hazani Ghazali.

Known for its brutal and sometimes deadly kidnappings, some of which have been carried out during raids on Sabah, Abu Sayyaf has declared loyalty to the Islamic State terror group.

It has been deemed a terrorist organisation by the US and the Philippines, where soldiers in March killed a key leader during a raid to free Indonesian hostages.

Abu Sayyaf is one of several armed groups operating in the southern Philippines, where Islamic militants have fought against the Catholic-dominated central government in Manila for decades and have also in the past asserted a territorial claim to Malaysia’s Sabah.