You are here: Home / West Asia / Malaysia hunts for IS supporters 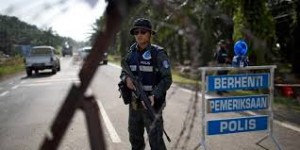 Police are tracing the whereabouts of three Malaysians suspected of being Islamic State (IS) supporters who recently returned from Syria, according to Jakartapost .

“We have identified their usual haunts and places where they are likely to be,” Deputy Home Minister Dr Wan Junaidi Tuanku Jaafar told reporters at the Parliament lobby here yesterday.

The authorities, he added, had also identified the families of the suspects.

“They are not able to openly try and influence the rakyat because they know that the police are looking for them,” Dr Wan Junaidi added.

He said information on the three came from sharing of intelligence information, which indicated that they might have undergone military training.

Dr Wan Junaidi however refused to give further information on the suspects, saying that once they are found, the three would be detained under the Security Offences (Special Measures) Act for 60 days to facilitate investigations.

Earlier, Dr Wan Junaidi told the Dewan Negara that as of April 1, 119 Malaysians had been identified as being involved with the IS.

Of this, he said 60 had been detained by the police, 46 were believed to be still in Syria, 10 died in the conflict and three were at large in the country.

Replying to a question by Senator Datuk S. Vigneswaran, Dr Wan Junaidi said the police were working closely with the Malaysian Communications and Multimedia Commission to clamp down on the IS influence on the Internet and social media.

He said this was necessary as Malaysians, particularly youths, were impressionable and could be swayed by IS ideology.

He cited a claim by the IS that “wife-swapping” among its members was allowed in Islam as an example of that ideology.

“They marry for only a day and the very next day, pass their wives around among each other.

“This is against Islamic teachings,” he said.