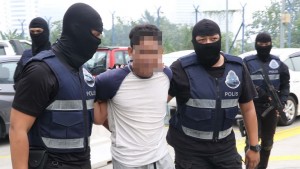 Four people, including three foreigners, have been arrested over their suspected involvement in a new Islamic State (IS) cell based in the Philippines, Malaysian police said on Monday (Jan 23), like reported by channelnewsasia.com .

The suspects are a 31-year-old Filipino man, two male Bangladeshi nationals aged 27 and 28 and a 27-year-old Malaysian woman.

They were arrested in Sabah and Kuala Lumpur between Jan 13 and 19.

The suspects are allegedly involved in a new Islamic State terror cell that planned to make Sabah a transit point for terrorists from Middle East and South Asia to be smuggled into Mindanao in the Philippines, police said.

The cell was formed from an IS cell led by former University Malaya lecturer Dr Mahmud Ahmad, merging with the Abu Sayyaf group under Isnilon Hapilon.

Malaysian police said that, with the arrests, the Special Branch has succeeded in “debilitating” the new terror cell.