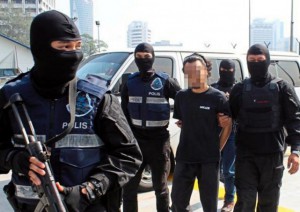 As of March 14, a total of 162 people connected to the terrorist group Daesh have been detained by the police, said the Home Ministry (KDN) today.

In a written reply at the Dewan Rakyat, the ministry said this number included five Sabahans.

“However, we (KDN) do not intend to provide detailed information as we do not want to affect police investigations,” the KDN said.

The ministry was replying to a question from Datuk Dr Marcus Mojigoh (BN-Putatan) on the number of people detained by the authorities in connection with the Daesh militant group, specifically in Sabah.

Marcus also wanted to know the amount of foreign funds which had been channeled to the group and seized by the authorities, as well as the government’s efforts to counter the militant activities in the interest of national security.

According to the ministry, so far no foreign funds had been brought into the country in connection with domestic or overseas terrorism but the authorities were very committed to combating militant activity here.

It added that the government had taken various measures including information-sharing with foreign intelligence agencies especially ASEAN member countries, blacklisting individuals suspected of involvement with the group, and placing their names in the Suspect List to curb their movement at the entry and exit points in the country.

“At the same time, the government is also implementing the Advanced Passenger Screening System (APSS) on people entering the country before they depart their country of origin to ensure that all foreigners were screened early and in detail,” it said.