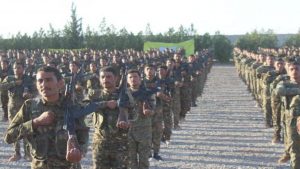 The Syrian Democratic Forces announced over the weekend that it has launched the “campaign to deter terrorism” in eastern Syria, one of the largest operations against ISIS since the fall of the militant group’s so-called “caliphate” in 2019, like reported by thenational.ae.

Unconfirmed reports estimated that 6,000 troops are taking part in the mission, which is being carried out in the area between Hasaka and the border with Iraq and around Deir Ezzor.

The mission is supported with “technical advice and eyes in the sky” from the US-led Global Coalition to Defeat ISIS and in co-ordination with the Iraqi military.

A statement released by the SDF’s general command said that ISIS attacks have increased recently, posing a “real threat to people’s safety, security and stability”.

It said that their forces have begun an operation on Thursday to “pursue and track the cells of the ISIS terrorist organisation in the eastern Badia (Syrian Desert), along the Khabour River and the Syrian-Iraqi border”.

“The campaign will target ISIS hideouts and hotbeds, which are a source for concern to the people and that work to disturb security and stability in the region, as well threatening the return of ISIS,” it said.

According to members of the SDF on social media, 40 ISIS “gang” members have already been detained, and six tunnels and bunkers destroyed.

The arrival of the coronavirus pandemic in the Middle East has provided a distraction that some believe ISIS have been exploiting to step-up operations, stoking fears of a resurgence.

Although the group has continued to stage attacks since the collapse of its physical territory in March 2019, it has carried out a series of large-scale attacks in Iraq and Syria over the last two months. Experts have said that the strikes have also become more sophisticated and complex.

At the end of last month, the group released a statement online that said changes in the region were offering “greater opportunities” than they have had over “the past decade”.

According to the Spokesperson for the Global Coalition, Myles B Caggins III, told The National that the SDF are conducting a “massive” anti-ISIS operation in eastern Syria.

“The international military coalition is supporting the SDF—specifically for anti-ISIS operations—with technical advice on planning and tactics, as well as intelligence sharing, including drones and air support,” he said.

“This is the largest SDF operation in 2020 and includes security along the Syria-Iraq border to disrupt ISIS smuggling routes.”

The Global Coalition met virtually last Thursday to discuss the creation of conditions to end the fight against the terrorist group.

“While ISIS no longer controls territory and nearly eight million people have been freed from its control in Iraq and Syria, the threat remains and thus calls for stronger vigilance and co-ordinated actions,” they said in a summary of the meeting on the coalition’s website.

At its height, ISIS controlled 88,000 square kilometres of land stretching across Syria and Iraq, but lost its last territory, the small town of Baghouz, to SDF fighters last year.