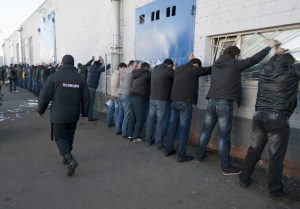 The main source of the terrorist threat to Russia comes from citizens of CIS countries rather than the Middle East, FSB chief Aleksandr Bortnikov says, because terrorists enter Russia alongside immigrant workers and then “begin to recruit in the migrant milieu”, like reported by windowoneurasia2.blogspot.it

In widely reported remarks today, Bortnikov acknowledged today that the recent terrorist attack in St. Petersburg showed that “the operational work of [Russia’s] special services does not correspond to the threats posed by illegal terrorist organizations and that the FSB needed to expand cooperation with “foreign partners” (republic.ru/posts/81746).

The FSB chief called for increasing the responsibility of officials and companies who work with migrants and also for those who rent apartments to them, a call that is certain to spark more demands for the introduction of visa requirements from Central Asian and South Caucasus countries.

Bortnikov’s words also will certainly spark more xenophobia among Russians, possibly leading to clashes between them and the more than 15 million immigrant workers in the country on whom the Russian Federation depends.  But they have the potential to lead to two more important consequences, one for Russia and another for the West.

For Russia, his conclusion that CIS countries – and Russia is one too – are now the major source of terrorism should lead to an appreciation that it was past Soviet practice and current Russian actions that have created this situation rather than the efforts of ISIS or others from abroad (windowoneurasia2.blogspot.com/2017/04/central-asian-islamist-terrorism-has.html).

And for the West, Bortnikov’s statement should be a wake-up call that the Arab world is ever less central to the Islamist threat and that Western governments and publics should be focusing on other parts of the Islamic world as a source of problems for them, including not incidentally the Muslim nations on the territory of the former Soviet space.