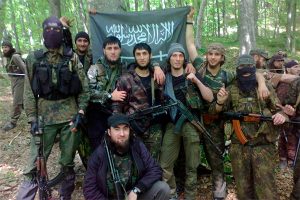 President of France Emmanuel Macron has announced that more than 300 Syrian Islamist militants have been transferred through Turkey’s Gaziantep into the Nagorno Karabakh conflict zone and are involved from the Azerbaijani side in the military operations.

International news media reported that France has confirmed that this is a proven fact and that Russia also possesses this information.

Macron added that France is closely working with the other co-chairs of the OSCE Minsk Group – Russia and the US – and that they are jointly preparing peaceful initiatives for the NK situation.

“I can announce that more than 300 Syrian Islamist militants, who had earlier left the Aleppo region, have been transferred to the Nagorno Karabakh conflict zone through the Turkish Gaziantep. This is a confirmed fact, these people are identified, all of them are affiliated with the Islamic State terrorist organization. I have discussed this issue with Russian President Vladimir Putin, who confirmed that Russia also possesses this information,” Macron told reporters.

The French President said these actions by NATO-member Turkey are unacceptable. He said Turkey has crossed the red line.