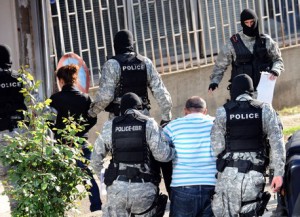 Police in Macedonia say they have arrested nine people on suspicion of being members of the Islamic State group and are looking for a further 27 suspects, following raids in the capital, Skopje, and several towns in the northeast of the country.

Interior ministry spokesman Ivo Kotevski told The Associated Press Thursday that all those arrested are Macedonian nationals. They are suspected of being volunteers or recruiters for the group to fight in Syria and Iraq.

Islamic State is banned in Macedonia, where participation of the country’s citizens in overseas militant groups carries a sentence of at least four years in prison.

The police raids took place late Wednesday in Skopje and the northeastern towns of Kumanovo, Tetovo, Gostivar and Struga.