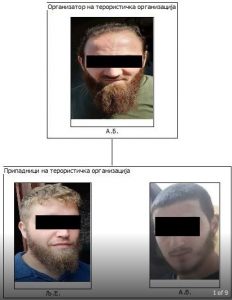 In a police raid carried out by the Ministry of Interior (MOI) of North Macedonia, in cooperation with the National Security Agency (NSA), and by order of the Basic Public Prosecutor’s Office for Prosecuting Organised Crime and Corruption (BPPO-POCC), three terrorists who organized themselves upon ISIS’ model and have conspired terrorist actions, were arrested yesterday, like reported by meta.mk.

During the arrests, explosive belts were also found. The arrested had fought for ISIS in the Middle East and had been jailed in North Macedonia on charges of terrorism, informed MOI and BPPO-POCC.

MOI has filed criminal charges to BPPO-POCC against B.A. (aged 28) from Kumanovo but with a residence in Skopje, for “terrorist organization” and “terrorism” including charges against B.A (aged 22) and E.Lj (aged 25), both from Kumanovo, for the same felonies.

B.A., V.A., and E.Lj. are returnees, who were charged for “Participation in a foreign army, police, paramilitary or parapolice formations” and were legally convicted and imprisoned.

They have acquired large quantities of weapons, ammunition, and military equipment, which was hidden close to the local road between the villages Biljanovce and Pchinja near Menkova Koliba.