You are here: Home / MidEastGulf / Loyalists advance in Yemen 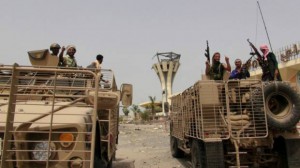 Saudi-backed forces loyal to Yemen’s exiled government captured more territory from Iran-backed rebels on Tuesday as they pressed an advance that has seen them retake large parts of the war-torn country’s south.

Aid agencies voiced alarm over the “catastrophic” humanitarian situation in the impoverished nation, devastated by months of fighting.

The gains by forces backing exiled President Abedrabbo Mansour Hadi have been aided by weapons and troops from Gulf countries, as Saudi-led coalition warplanes continue to pound rebel positions.

The town is in the majority province of Dhammar, which borders Sanaa province, where Iran-backed rebels have held the capital since September.

“Sanaa is the real target” of the advancing pro-Hadi forces, said analyst Mustafa al-Ani, from the Gulf Research Centre.

Complaining of marginalisation, the Huthis descended from their northern stronghold last year and seized Sanaa unopposed before advancing on second city Aden in March.

They took Loder, the last rebel-held town in Abyan, late on Monday, and were poised to enter the southern Shabwa province.

The advance is heading toward third city Taez, southwest of Sanaa.

Pro-government militia sources said clashes were ongoing in the city itself, which if recaptured would prove a major fillip for Hadi loyalists.

The government’s Sabanew.net website reported that 36 rebels were killed in the fighting late on Monday.

The sweeping victories in the south are a result of the rebels pulling their forces back to Taez, according to Yemeni analyst Abdulaziz al-Sabri.

“Whoever wins Taez wins all of Yemen,” he said.

Backed by Saudi-led air strikes, pro-government forces have been battling for months to restore Hadi, currently in exile in Riyadh, to power.

“The direct intervention in the battle, especially of Saudi Arabia and the United Arab Emirates, in addition to the cover from air, has completely shifted the balance of power… and revealed the other side’s weakness,” said analyst Ani.

Military sources say the coalition has provided Hadi’s supporters with modern heavy equipment in recent weeks, including tanks and other armoured vehicles as well as personnel carriers and Yemeni soldiers trained in the kingdom.

One source last week reported the deployment of “hundreds of soldiers from Gulf countries” in Aden, while Saudi-owned newspaper Al-Hayat reported on August 3 that a total of 1,500 troops, most of them from the UAE, had entered the city.

Six Emirati coalition soldiers have so far been reported killed.

UAE media on Tuesday quoted the Emirati Minister of State for Foreign Affairs Anwar Gargash praising the “professional performance” of his country’s troops on Yemen.

“The operation for liberating Sanaa has proven that we have a strategy that could shift balances” of power, he said.

As well as the Huthis, rebel forces include renegade troops still loyal to former president Ali Abdullah Saleh, who was ousted in 2012.

The conflict has cost nearly 4,300 lives since March, half of them civilians, according to UN figures, while 80 percent of Yemen’s 21 million people need aid and protection.

The president of the International Committee of the Red Cross (ICRC), Peter Maurer, warned following a three-day visit to Yemen that “the humanitarian situation is nothing short of catastrophic… And it is getting worse by the day.”

“The world needs to wake up to what is going on,” he said.

And the World Health Organisation said that nearly a quarter of health facilities in Yemen had been knocked out of action since fighting began. “Additional facilities continue to close down week by week… leaving civilians without access to critical, life-saving health care,” it said.