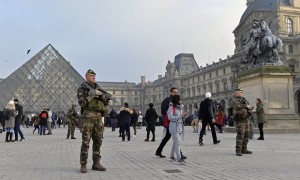 The Louvre museum lost nearly €10m (£8.6m) last year after a drop in visitor numbers blamed on fears of terrorism and closures caused by the risk of flooding, like reported by theguardian.com.

Jean-Luc Martinez, head of the Parisian institution, said it had been “a difficult year” for most tourist sites in the French capital and the museum had finished the year with 15% fewer visitors than in 2015 – down about 2 million people to 7.3 million.

Despite the gloomy figures, he said he was hopeful ticket sales would improve in the coming year.

“We finished with a loss of €9.7m, without counting the lower takings at the bookshops and restaurants,” Martinez told Le Figaro. “Everything is being done to deal with this. The situation is worrying, but I am calm about it. We already had a similar drop in 2001 after the September 11 attacks when the number of visitors dropped by 36%. After that, it took three years for us to recover our previous number of visitors.”

The number of French visitors has remained stable, but the Louvre has lost international tourists put off by the series of terrorist attacks in France since January 2015. There was also a drop in school visits because of increased security following the November 2015 attacks across the city.

Renovation work – since completed – under the famous glass pyramid, now one of the Louvre’s main entrances, also hit the size and number of fundraising evenings that could be held.

In June, it was forced to close for several days as the Seine rose and threatened to flood its galleries.

The figures came as a blow for the Louvre, which had been aiming for 10 million visitors last year, after hitting an all-time high of 9.7 million in 2012 and becoming the world’s most visited museum, but it was not the only Paris museum to be affected.

The Musée d’Orsay also saw the number of visitors drop by 13%, but the Pompidou Centre’s ticket sales increased by 2%, thanks to a rise in French visitors.

The number of visitors to Paris dropped overall by 6% in 2016, according to the city’s Tourism Observation Office.

Martinez said making France attractive once more to tourists was “an enormous challenge” for the country, its capital and the whole Paris region. He said security measures at the Louvre had been increased to allay foreign tourists’ fears.

“We are improving all aspects of the visit … but I’m not going to chase visitors for the sake of having visitors. I want to improve how we welcome the public. Since we reorganised the entrance hall and began selling tickets for certain hours on the internet, the level of visitor satisfaction has grown by 17 points. Now there are only around 15 days of the year during certain parts of the museum are overcrowded.”

Asked whether the Louvre was staging exhibitions that were popular with the public – last year’s display of work by the 18th-century sculptor and designer Edmé Bouchardon attracted only 87,000 visitors – Martinez said: “The Louvre’s programme must reflect the wealth of its collections.” He added that the museum was in the process of modernising the galleries containing many of its permanent collections of paintings and furniture.