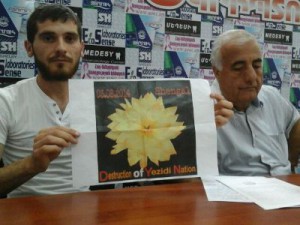 Lotus has become a symbol of the Yazidi genocide perpetrated in Iraq last year, head of Yazidi union in Armenia Roman Avdoyan said.

The flower of lotus has a great meaning for the Yazidis, he explained.

“If you pick lotus, it recovers very quickly and grows again. Therefore, it is linked to the fate of Yazidis. Everyone knows that the Yazidis were subjected to genocide for many years, but we are still here thanks to our firm will. This flower is usually white, but our symbol has a yellow hue because Yazidis worship the Sun,” he said.

According to him, the tips of the lotus petals are painted red as a sign of the killed Yazidis. The symbol has an inscription – DYN which stands for Destruction of Yazidi nation.

Avdoyan said August 3 marks the first anniversary of the genocide of the Yezidis in Iraq perpetrated by the Islamic state.