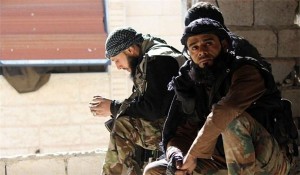 The al-Qaeda-affiliated terrorist group, al-Nusra Front (recently renamed to Fatah al-Sham Front), is on the verge of collapse in Syria after losing several high-ranking commanders in war or in defections, including the group’s spokesman Mustafa Faraj.

Media outlets close to the dissident groups reported that Abu Suleiman al-Misri, nom de guerre Mustafa Faraj, who was a member of al-Nusra Front’s council and responsible for interviews with foreign media, has defected the terrorist group after the death of tens of senior commanders in Syria in recent months.

Analysts believe that Faraj’s defection will have deep negative influence on al-Nusra members.

The records of Faraj’s extremist tendencies date back to when he was in Australia and conducted extremist acts in the country along with an al-Qaeda member, named Bilal Khaz’al, who had held a meeting with Osama Bin Laden in Afghanistan. He also had relations with one of the Lebanese militant leaders named Hessam Sabbaq, who was arrested in 2007 for ties with al-Qaeda.

Faraj’s long-time relations with al-Qaeda reveal how he was persuaded to move to Syria to take charge as a senior member among the al-Nusra Front leaders and commanders. He was appointed as the official spokesman and one of the most important religious experts as soon as he arrived in Syria.

When seen along with al-Nusra Front’s loss of thousands of fighters in the war in Aleppo and the terrorist group’s failure to convince the international community to strike it off the terror blacklist after its recent renaming to Fatah al-Sham Front, his resignation on October 17 indicates the collapse of the terrorist group, as Nusra members as well as other militant-affiliated social media pages believe that Faraj has resigned to save his life as the Al-Qaeda offshoot is moving on a slippery slope towards demise in Syria.

The group is admittedly losing its command structure as well as thousands of fighters only in Aleppo.

Sources close to the terrorist groups admitted on Wednesday that between 2,200 up to 2,500 militants have been killed or wounded in their large-scale offensive on government forces’ positions in the Western and Southwestern parts of Aleppo city in the last few days.

The Arabic service of RT quoted the sources as saying that Jeish al-Fatah suffered between 2, 200 up to 2,500 casualties, including a large number of non-Syrian militants, in their Great Epic Operation on Army positions in Western and Southwestern Aleppo from October 28 to November 2.