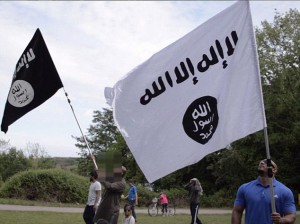 Counter terror police and MI5 are investigating social media bomb threats that appear to come from terrorists in Syria and Iraq.

Chilling warnings of an imminent attack against the UK capital have been made in the past few days on Twitter using the hashtag #LondonAttack.

Many of the threats were telling Muslims to avoid Covent Garden, in Central London as a blast was going to be launched against British civilians.

Pictures of assault rifles were posted on some accounts, while others apparently showing explosive devices, nails and ball-bearings were uploaded on others.

One so-called Islamic State terror group sympathiser even claimed he had just learned how to make a suicide belt from his older brother.

Last night Whitehall sources said that although the social media alert was being investigated “none” of the bomb threats were thought to be from inside the UK.

One senior source said: “The threat level for an attack against the UK is still at ‘Severe’ which mean an assault on UK citizens remains ‘likely.

“So all of these threats are taken seriously but they do not mean there is a credible threat of an attack as it is not thought they come from within the UK.

“These twitter handles are familiar to those investigating ISIS threats and illustrate how the group is using social media as a propaganda tool.

“If these tweets are being sent from Iraq and Syria – and there is every reason to believe they are – then they are not in the UK and therefore not really that credible.”

The Metropolitan Police has moved quickly to dispel concern about an attack.

A spokeswoman said: “We are aware of #LondonAttack tweets, we’re looking into them, we don’t now see them as a credible threat.”