You are here: Home / Europe / London: record number of armed Police is ramped up in wake of Islamist terror threat

A record number of armed police will be patrolling London’s streets for New Year’s Eve celebrations as security is tightened following a string of terrorist attacks on the Continent, like reported by telegraph.co.uk 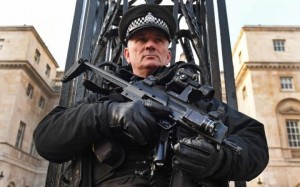 The number of armed Scotland Yard officers will be higher than the 2,000 on duty for last year’s festivities and armed transport police will again patrol the London Underground.

A record number of concrete bollards will also be placed around central London to protect crowds from any attempt to copy lorry attacks which have killed scores in Nice and Berlin.

Ken Marsh, chairman of the Metropolitan Police Federation, said: “I can assure you that there is a big armed operation over London. There are more armed police this year than there have been ever before. There are far more bollards that have been put in place than ever before.”

In total, 3,800 police officers will be on duty in central London, with thousands more in the rest of the capital, he said.

British Transport Police also announced that armed officers will patrol Tube trains during the festivities and will begin routinely patrolling the Underground network for the first time in 2017.

Armed transport police have guarded Underground stations for some time, but will now begin travelling by Tube train as well, a spokeswoman said.

Hundreds of thousands of revellers are expected to descend on the capital to seen in 2017 and watch the annual fireworks along the Thames.

Security officials judge the UK has been at severe threat from terrorism for more than two years, with an attack viewed as highly likely.

Scotland Yard has confirmed that security plans had been “adjusted” after Islamic State-inspired terrorists ploughed lorries into crowds in Europe.

Central London will be closed to traffic and commanders said while there was “no specific intelligence” of an attack on London, “both overt and covert” security measures had been put in place.

Mr Marsh said: “We have everything in place I think. We want everyone to have a good time and enjoy themselves.”

Fears of a repeat of the recent terror attacks have seen cities raise security across Europe.

Earlier this month, Anis Amri killed 12 people and injured dozens more when he drove a hijacked lorry into a Berlin Christmas market.

Madrid announced on Friday it would ban private vehicles of 3.5 tons or more from entering the city in the run-up to major festive parades marking the feast of Epiphany next week.