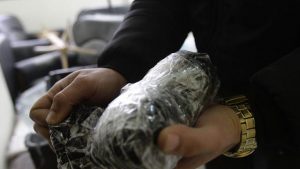 London has a big “Hezbollah problem”, a US counter-terrorism expert has warned, suggesting that the terrorist group has carried out illegal activities in the UK capital.

The warning came ahead of a parliamentary debate today (25 January) on whether existing restrictions on the organisation in Britain should be tightened, like reported by ibtimes.co.uk.

Dr Matthew Levitt, director of the counter-terrorism programme at the Washington Institute for Near East Policy, said Britain’s current policy was ineffective and that the presence of Hezbollah was a major issue in London.

“London has a Hezbollah problem,” he wrote in a guest post published by the International Centre for the Study of Radicalisation at King’s College London.

“Hezbollah continues to engage in terrorist and criminal activities — within the UK and the EU more broadly — despite the partial ban.

“Protesters waving Hezbollah flags on the streets of London argue they are only demonstrating support for Hezbollah’s political wing, not its terrorist wing, though the group’s militants and politicians all fly the same flag featuring a machine gun front and centre.”

Levitt added that Hezbollah was undermining British interests abroad and was involved in running drugs and raising funds on British soil for its military wing.

“Hezbollah engages in far worse behaviour than that [waving flags during demonstrations] in the UK, underscoring the ineffectiveness of banning just part of a group engaged in widespread terrorist and criminal activities,” he added.

Under British law, members of Hezbollah’s political wing are allowed in the country, unlike its terrorist and military wings. In the US, by comparison, all wings of the organisation are banned.

Ryan, who is also the chairwoman of the Labour Friends of Israel group, was the driving force that took the debate to parliament.