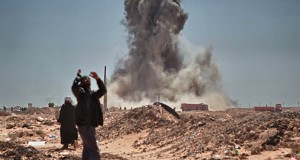 The town of Ben Jawad, located near Libya’s major oil ports, was taken over by armed groups. Soldiers loyal to Libya’s eastern parliament and General Khalifa Haftar fought back with airstrikes, according to officials.

The forces loyal to the Tobruk-based parliament had only taken control of some of the major oil facilities in the area from the Petroleum Facilities Guard (PFG) in September.

The clashes between the two groups is likely to trigger more battles over the control of the oil facilities.

The attackers are likely to have been from the Defend Benghazi Brigades, who had also attempted to resist Haftar from expanding his control in eastern Libya, said an eastern security official.

The airstrikes fired by the Haftar loyal forces destroyed some of the attackers vehicles.

Residents in neighbouring Ras Lanuf were able to hear the military jet flying but said that the situation in Ras lanuf was calm.

In the last few weeks, rumours about an attack on oil facilities have been spreading. The rumours said the attacking group would likely be the PFG or brigades from Misrata.

Ben Jawad is about 150 kilometres southeast of Sirte, where Libyan forces loyal to the UN-backed Government of National Accord (GNA) have recently liberated Sirte of ISIS after enduring close to seven months of fighting.

Escalating fighting in the oil crescent region puts the oil facilities at risk of being damaged. If the oil facilities are damaged oil production would drop which would lower Libya’s oil revenue and add pressure to the already struggling Libyan economy.

Following the civil unrest in Libya which began in 2011, oil production dropped to about 660,000 barrels of oil per day. Production began to drop when international oil companies began to pull out as the civil conflict in Libya intensified.

The first export of of oil, which consisted of 781,000 barrels, since force majeure was issued in December 2014 left the Ras Lanuf oil port on September 21.

The escalating violence put the oil fields and ports under force majeure, which legally prevents a group from being held liable when the situation is out of their hands.

Force majeure for Zueitina oil port, along with Es Sider and Ras Lanuf oil ports, was lifted by the NOC on September 14 when a deal was agreed upon by the state oil company and Haftar, who recently took possession of the ports by force.