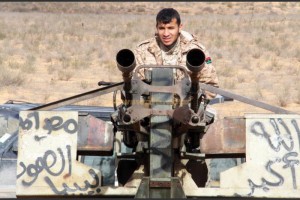 Warning of his country’s “ability to defend our sea and our land”, Mr al-Ghawi said the deployment of European armed forces during the ongoing migrant crisis is “completely unacceptable in the modern world”.

His comments come as Britain and its European partners attempt to deal with the huge increase in refugees making the perilous, and often fatal, journey from Africa and war-torn Middle East to southern Europe, using Libya as a transit point.

The EU is currently considering the options in response to the crisis, which include sinking smuggling boats and carrying out armed operations in Libya to tackle human-trafficking gangs.

Desperate migrants are charged extortionate prices by traffickers to make the journey to Europe in perilous boats, the reason many drown, while they are often treated badly by gang members.

Mr al-Ghawi, the leader of one of two rival administrations in civil war-torn Libya, said his government had not been consulted by the EU over the military proposals.

He told The Independent: “They can’t come to control us, we can’t return to the era of 1911 [when Italy captured large parts of Libya], foreigners deciding things.

“We have the ability to defend our sea and our land, as we had shown in our history and also during our revolution.”

A total of 369 people were saved, including 50 small children, while HMS Bulwark will now be used to help transport more than 800 stranded migrants to points of safety.

They were among a total 1,000 migrants were rescued from boats on Thursday, adding to the 60,000 people who have already tried to make the crossing so far this year, according to United Nations estimates.

EU naval vessels also picked up 741 migrants travelling from Libya in six boats off the coast of Siciliy, the Italian coastguard said.

The UN estimates that about 1,800 people have already died this year making the treacherous trip.