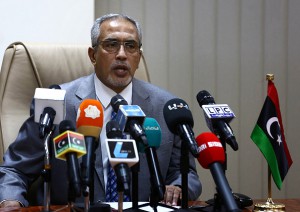 He said 14 government ministers had called for Hasi’s dismissal.

The spokesman added that the GNC’s first deputy speaker, Khalifa al-Ghowel, had been named to run a caretaker cabinet until a new government was formed within one month.

Hasi had been tasked by the Tripoli-based parliament to form the government last summer.

Libya has remained in a state of turmoil since a bloody uprising ended the decades-long rule of strongman Muammar Gaddafi in late 2011.

Since then, the country’s stark divisions have yielded two rival seats of government, each with its own political institutions and military capacities.

Vying for legislative authority are a Tobruk-based parliament and an Islamist-led parliament that convenes in Tripoli.