The fighting proves once again the impossibility of holding elections in the fragmented country, like reported by middleeasteye.net 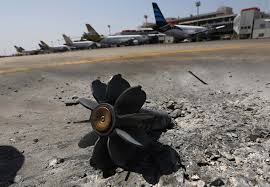 Clashes around Tripoli’s only civilian airport are part of an ongoing battle for hegemony between rival Libyan militias in the increasingly fragmented country, Libyan sources told Middle East Eye.

At least 20 people have reportedly died in the fighting that forced the closure of Mitiga airport on Monday, officials said.

Al-Radaa, a force loyal to the UN-backed Libyan government and tasked with keeping the airport secure, said it had come under attack from the 33rd Brigade, a militia that generally opposes the internationally-recognised government but has no clear alliance with opposition general Khalifa Haftar.

A source close to fighters with the 33rd Brigade told Middle East Eye: “This operation has been in the works for some time now.” Radaa forces remain in control of the airport and surrounding areas, the source said.

The Facebook page for Mitiga airport, in eastern Tripoli, said “flights have been suspended because of fighting that broke out this morning”.

“These fighters want to free the prisoners that the Radaa has detained. They [the Radaa] are kidnapping people, detaining bank managers. These people are going to die from the torture they are facing,” said Omrani.

“What these militias want to do is lift the oppression of the Radaa from the people,” he added.

Riccardo Fabiani, a senior analyst in Middle Eastern and North African affairs at Eurasia Group, said the clashes were part of a protracted battle between Madhkhalis, a Salafi-leaning group whose number make up the Radaa, and others.

“These clashes are nothing new – they are part of a long-standing pattern that sees Madkhali militias against other armed groups who refuse their hegemony both out of ideological reasons and because they want to control Tripoli.”

Al-Radaa is largely made up of Madkhalis, so-named after the hard-line Saudi Sheikh Rabi al-Madkhali. Analysts have said that the Madkhalis are split – some are loyal to UN-backed government groups, such as al-Radaa, whereas others follow Haftar.

“The Madkhalite Salafis in Libya always go where the power lies,” Mattia Toaldo of the European Council on Foreign Relations said in October. “They support Haftar in the east, but also [prime minister of the UN-backed government Fayez] al-Serraj in Tripoli.”

When General Haftar launched Operation Dignity in 2014, his campaign to defeat militants in Benghazi, al-Madkhali issued a fatwa in support of the campaign. Haftar has since been accused of committing war crimes.

Under the late Libyan ruler Muammar Gaddafi, the group was allowed to remain active because of their call for obedience towards authority.

Mitiga, a former airbase, has been a civilian airport since Tripoli’s main international airport was badly damaged from fighting between rival militias in mid-2014.

Libya has been wracked by chaos since the 2011 uprising that toppled and killed Gaddafi, with rival authorities and militias battling for control of the oil-rich country.

Ahmed Gatnash, co-founder of the Kawaakibi Foundation, a think tank which works to promote liberal values in the Muslim world, said that al-Radaa’s use of torture stems from a culture of abuse that existed under Gaddafi.

“The widespread use of torture is symptomatic of a culture of not respecting fundamental rights, which was entrenched over many decades by authoritarian rulers,” he said.
“In that sense, what the militias are doing isn’t much different from Gaddafi before them, just that they’re less able to keep it out of public awareness.”

No hope for free and fair elections

Experts have explained to MEE that the battle at Mitiga airport provides evidence that Libya does not have the capacity to hold free and fair elections, despite UN pressure for them to be held this year.

UN envoys last week emphasized the need for Libyan elections this year despite Haftar’s warning that he would “take action” if the country’s reconciliation and push for democracy failed.

Fabiani, the Eurasia Group analyst told MEE: “This latest episode highlights once again the precarious security situation in Libya and the impossibility of holding elections in the current conditions.”

While the country remains split between rival governments following a disputed vote in 2014, in which turnout was just 630,000 people, experts have speculated over the implications of an election and its consequences for Libyans and Haftar’s role in the country’s leadership.

“It is literally unthinkable to hold free and fair elections in a country that is divided among opposing militias that have very different ideas about the future of the country,” Fabiani added.

“I personally believe that despite what the UN says we will not have elections in Libya before middle of 2019,” a Libyan analyst told MEE.