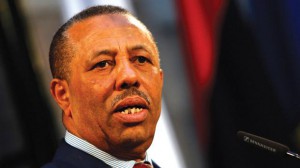 Libyan Prime Minister Abdullah al-Thinni said Wednesday that he was willing to sign a power-sharing deal with Islamists who have set up a rival government in Tripoli.

Thinni said during a visit to Malta that the “wise and kind people of Libya” wanted a solution to the country’s long-running political chaos and uncertainty. But he said he understood that “any decision taken will always have enemies.”

U.N. Special Representative Bernardino Leon has been struggling for months to get both sides to agree to a deal that would give each authority while meeting the threat from Islamic State.

The U.N. Security Council issued a statement Wednesday stressing that there could be no military solution in Libya. It said it would impose sanctions against anyone who threatened Libya’s peace and security or who undermined “the successful completion of its political transition.”

Libya has been dealing with violence and turmoil since longtime dictator Moammar Gadhafi was overthrown in 2011.

Islamists took over the capital, Tripoli, last year and set up their own government and parliament, forcing Thinni’s internationally recognized government to flee to the eastern city of Tobruk.