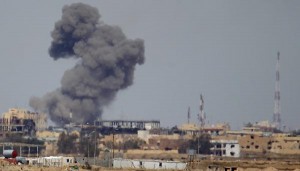 Military aircraft belonging to a rival Libyan government attacked Islamic State positions in and around the central city of Sirte, where the radical group claimed to have seized an air base, a government official said.

Islamic State has exploited the general turmoil and security vacuum in Libya to build up a presence in several cities, where two governments are vying for power four years after the ousting of Muammar Gaddafi.

The militants earlier this year seized Gaddafi’s home town of Sirte, pushing to its suburbs a force loyal to a rival government in Tripoli which had expelled the official Premier Abdullah al-Thinni to the east in August.

War planes attacked Islamic State positions in Sirte, a government spokesman in Tripoli said, adding he was not aware of reports that the militants had seized the al-Qardhabia air base, located near Sirte’s civilian airport, south of the city.

Islamic State militants said in a statement on Twitter that they were in control of the base, adding that both sides were clashing at key points in Sirte.

A nearby resident said the base appeared to be under control of Islamic State, but Reuters was unable to confirm this independently.

Militant fighters in Libya loyal to Islamic State have claimed since the start of the year the killing of dozens of Egyptian and Ethiopian Christians as well attacks on Tripoli’s luxury Corinthia hotel, embassies and oilfields.

Libya’s internationally recognized government has been working out of the east of the country since losing control of Tripoli and western Libya in August.