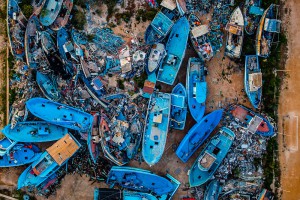 While international attention has largely shifted to the flow of refugees from Turkey into Europe, those attempting to reach Europe from Libya continue to die by the hundreds

The collapse of the Libyan state has left a vacuum that has been largely filled by militias and criminal gangs, both of whom fund themselves through a largely informal smuggling economy

Refugees transiting Libya face extreme levels of abuse and exploitation, and many are used as a form of currency

The revenues from human trafficking in Libya are actively fueling the conflict, at great human cost.

Between January and September of 2015, Frontex, the EU border management agency, has reported 359,171 illegal border crossings from the eastern Mediterranean—primarily from Turkey—more than 150,000 of which were Syrians fleeing the civil war.

This unprecedented number is already seven times the figure for the entirety of 2014, and thousands more migrants continue to arrive in Europe every day. In the same period of 2015, the central Mediterranean route—almost exclusively those traveling from Libya—saw 128,619 illegal border crossings, short of the total 2014 figure of 170,760. However, migrants traveling from Libya account for a full 90% of migrant deaths in 2015–2,700 to date—according to figures from the Missing Migrants Project.

In some ways, the disparity should not be surprising. At its nearest point, the distance from the Turkish coast to the Greek island of Kos is slightly more than three miles. The distance from the western Libyan city of Zuwara—a popular port for traffickers—to the Italian island of Lampedusa—the nearest European territory—is slightly more than 180 miles.

Libyan traffickers send refugees by the hundreds, crammed into unseaworthy ships with faulty engines and zero navigation capabilities. Once in open water, the Mediterranean takes its toll; one April shipwreck claimed nearly 700 lives. The International Committee of the Red Crescent in Libya has enlisted nearly 7,000 volunteers to comb the beaches of western Libya and collect the hundreds of bodies that have washed ashore.

The massive human cost is only one aspect of the continuing refugee crisis in Libya. The lucrative human trafficking trade—worth an annual $300 million in Libya alone—has become a key factor in the black market economy driving conflict not just in Libya, but also in neighboring Chad and Niger. The majority of refugees in Libya are Eritreans (20%) and Nigerians (10%), though the overall migrant demographic is extremely diverse, to include populations from West Africa, Somalia, Syria, and Afghanistan. These refugees make perilous journeys across the Sahara, often paying more than $1,000 USD each simply to reach Libya.

Once inside Libya, they are essentially monetized; the Tuareg and Tuba tribes that dominate southern Libya trade the refugees for black market fuel and weapons from the Arab militias to the north. Primary human trafficking hubs, such as the desert city of Sabha, have become something out of the Wild West, with Tuba, Tuareg, and Arab militias all vying for control of the key smuggling routes.

Once in the hands of Northern militias—whether those affiliated with Libya Dawn or the recognized government in Tobruk—refugees are placed in ‘detention.’ Based on limited reports from human rights groups and the testimonies of those who have reached Europe, the conditions in migrant camps are atrocious, and the Libyan guards are abusive, particularly toward non-Muslims.

To make matters worse, most international refugee and human rights agencies have left Libya due to the perilous security situation. In addition, neither Libya Dawn nor the Tobruk government has the resources to assume extended responsibility for the refugees. Unable to return to their home countries, and unwelcome in Libya, reaching Europe is their only remaining choice. Along the coast of Libya, anyone with a boat can become a smuggler. Without interference from—and some reports note active collaboration with—the militias, smugglers will work to further extort money—sometimes several thousand dollars —from the refugees for the journey to Europe. Those unable to pay are often made to do physical labor, both for the smugglers and for militias.

As many have already exhausted their resources, the families of refugees are often forced to scrape together scarce resources simply to pay for a spot on an overcrowded boat. Prosecution of smugglers is rare in Libya, so there is no practical incentive to ensure the safety of the refugees once at sea—once they pay the smugglers, their value is minimal.

The death tolls off the coast of Libya is a direct result of the process of dehumanization and monetization perpetrated by both the smugglers and members of the Libyan militias. While the Syrian civil war is driving refugees from the fire, the conflict in Libya is actively drawing them in as kindling, before abandoning them to the sea.