You are here: Home / Mediterranean / Libya’s parliament should ratify political agreement before end of year 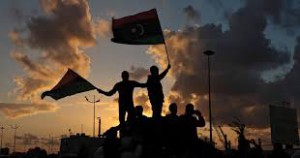 Egypt’s foreign minister Sameh Shoukry said on Tuesday that the Libyan parliament should ratify a political agreement, reached last July, before the end of this year “so we wouldn’t have to look into alternative plans that might meet resistance from some of the Libyan factions.”

Shoukry, attending a ministerial-level meeting in Algeria of Libya’s neighbouring countries, was referring to the political agreement reached in Morocco’s Sikhra City which stipulates the reaching of a peaceful transition and establishing a national unity government.

Bernardino León, the UN secretary-general’s special representative and head of the UN Support Mission in Libya, said last October that although a draft of the political agreement was initialled by some parties on 12 July, an agreement will only be reached when a final package “makes sense for everybody and will be signed by everybody.”

“History won’t forgive the parties that obstruct the [political agreement], because they won’t only negatively affect Libya, but they would lead to the destabilisation of the region, neighbouring countries and southern Europe in general,” the Egyptian official added.

Shoukry said that the next unity government will need to impose its authority throughout the country’s territories and thus reiterated Egypt’s calls for lifting the arms embargo on Libya that was imposed in 2011.

In February, UN Security Council member Jordan submitted a draft resolution to lift the Libyan arms embargo, but no decision was reached and talks came to a stalemate.

Shoukry expressed his concerns over the growing influence of militant group ISIS in the country despite efforts to combat it by the Libyan security forces, who remain disadvantaged due to ISIS’s access to financial support which aids in its ability to sneak arms into its territory.

Earlier on Tuesday, the Egyptian foreign minister told state news agency MENA that “this meeting comes at a critical stage after the worrying developments of ISIS announcing that they took over [the Libyan coastal city of] Sirte.”

The meeting includes ministers from Algeria, Egypt, Sudan, Tunisia, Chad, Niger, as well as representatives from the African Union, the Arab league, the European Union and Libya.

Libya currently has two governments – only one of which is internationally recognised – fighting for control of the country, while ISIS militants are attempting to exploit the security gap.

Libya’s Tripoli-based government, which is not recognised globally, seized partial power a year ago after an armed faction forced the recognised government and parliament to operate out of eastern Libya.