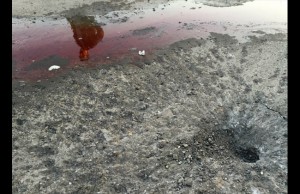 The North African country is in the throes of a power truggle with two governments allied to dozens of armed groups fighting each other four years after the uprising that ousted veteran strongman leader Moammar Gadhafi.

While unable to defeat each other on several front lines across the oil-producing state, both governments have also been clashing with ISIS insurgents exploiting a security vacuum as in Iraq and Syria.

Saqer al-Joroushi, air force commander of the official Libyan government based in the east since losing control of Tripoli in August, said his warplanes had hit ISIS positions in Derna on Monday and Tuesday.

“We ask all residents to stay away from checkpoints and ISIS locations,” Joroushi told Reuters. “We also warn fishers and tankers against approaching the coast all the way to Derna.”

Egyptian jets bombed Derna in February after ISIS published a video showing the beheading of 21 Egyptian Christians. ISIS and other militant groups have established a large presence in the eastern coastal town.

Two foreign seamen were killed when a Greek-operated fuel tanker docked at Derna port was bombed in January. The government said it had been transporting arms. A Tripoli-based state oil firm said it had been carrying fuel for a power plant.

The capital has been under control of a rival government and parliament set up after an armed group seized Tripoli in August by expelling a rival group allied to Prime Minister Abdullah al-Thinni.

Both competing governments have teamed up with former anti-Gadhafi rebels who worked together in 2011 to topple Gadhafi but now have split along regional, tribal and political lines.