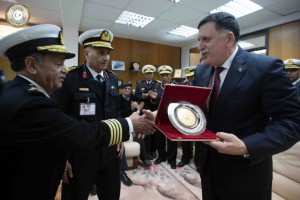 The head of Libya’s national consensus government Fayez Al-Sarraj yesterday announced that his government will operate from Tripoli, France Press reported. The French agency quoted a source in the Libyan naval forces as saying that Al-Sarraj held a meeting with the naval forces’ commanders upon his arrival on the base.

Libya’s Presidential Council had announced that Al-Sarraj was in Tripoli.

Libyan sources said that most of the members of the Presidential Council arrived on board Italian frigates, adding that the cabinet’s headquarters has been completely secured in preparation for Al-Sarraj’s arrival.

Amid expectations that the UN-backed national consensus government was about to move from Tunisia to Tripoli, explosions were heard in the city and they were followed by heavy gunfire in the early hours of yesterday.

The national consensus government has been warned against relocating to the city.