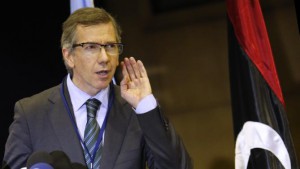 “The draft given by Bernardino Leon, head of the UN mission to Libya, will be totally rejected. We demand the international envoy to reconsider the way it works,” Omar Ehmedan, a member of the GNC, announced the decision in a press conference.

Libya has been witnessing a frayed political process after the 2011 turmoil which toppled its leader Muammar Gaddafi. The country is now juggling two rival parliaments and governments.

According to Libya’s transitional plan, the June-elected parliament, the House of Representatives (HOR), has already replaced the former interim General National Congress (GNC).

However, the armed Islamist alliance Libya Dawn, which has achieved a series of military progress since July in western Libya, backed the GNC to resume power and form its own government against the new one.

Since last September, the United Nations Support Mission in Libya (UNSMIL) has been struggling to solve the political jigsaw puzzle in Libya by brokering peace talks, but the endless clashes between different armed groups and lack of genuine desire to reach a political solution made the UN efforts fruitless.

On March 24, the UNSMIL made a draft peace plan to end the crisis, including the formation of a transitional unity government within two years after a new constitution is adopted and elections held.

Ehmedan explained the GNC rejection, saying the plan is “not objective and needs to be reviewed.”

So far, the internationally-recognized HOR has not commented on the draft peace plan.