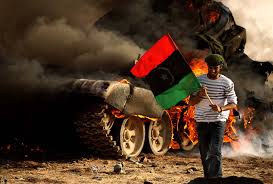 Libya’s internationally-recognized parliament refused to sign the United Nations’ proposal for peace on Monday. The government spokesman Farraj Abu Hashem said leaders in Tobruk did not accept the deal for a unity government because it included amendments added by Islamists without its consent.

However, the UN said that “this is the final text.”

“We are not reopening the text and our hope remains that all sides will agree to the text for the good of the people of Libya,” UN deputy spokesman Farhan Haq said.

The nation became politically unstable after Western forces toppled late dictator Moammar Gadhafi. The country was then divided between Islamist-led forces, based in the capital Tripoli and the internationally-recognized government in Tobruk.

On October 8, the UN’s Special Envoy for Libya, Bernardino Leon, announced a proposal to foster unity between the warring factions along with a list of candidates to head the new body.

However, Tobruk politicians were against some conditions, including giving the unity government power to fire all senior Libyan officials not unanimously agreed upon by its members. The leaders thought this was a ploy to remove General Khalifa Hifter, whose army has been fighting the Islamists.

The Islamist-led government in Tripoli, on the other hand, said it was not officially rejecting the deal, but “signing it would lead to further complications.” It also felt that there were not sufficient guarantees that Islamic law would be implemented.

Meanwhile, Western countries and Arab nations released a statement on Monday, asking the rival groups to accept the UN proposals “immediately” to end instability in Libya.

The statement, published by foreign ministers of Algeria, Britain, France, Germany, Italy, Morocco, Qatar, Spain, Tunisia, Turkey, the United Arab Emirates, the US and the EU , called “on all parties in the Libyan political dialogue to immediately adopt the political agreement negotiated by the Special Representative to the United Nations, Mr. [Bernardino] Leon.”