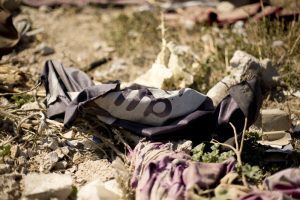 The Libyan Interior Ministry of the Government of National Accord (GNA) arrested Tuesday the media expert of ISIS terrorist groups in Sirte, Saied Abdelkareem, (A.K.A. Abu Rami) who is a 34-year-old Sudanese national, born in Sirte, like reported by libyaobserver.ly.

The Ministry said the Anti-Crime-Terrorism Deterrence Apparatus detained the ISIS militant after a security operation that had been ongoing for weeks.

Abu Rami was part of Ansar Al-Sharia’s media teams from 2012 to 2014, then he pledged allegiance to ISIS and worked at ISIS-linked Al-Bayan Radio in Sirte as a video and news editor and presenter.

Abu Rami was part of the team of ISIS senior leader Ahmed Al-Himmali (Abu Abdullah) who was the leader of Tripoli ISIS sleeper cell that carried out attacks in 2014 and 2015 before he was killed by Al-Bunyan Al-Marsous forcs in Sirte Liberation battles in 2016.

The Interior Ministry said it had found with Abu Rami an archive for information about the activities of ISIS when they were controlling Sirte, adding that he was later sent to the Public Prosecution for further legal procedures.