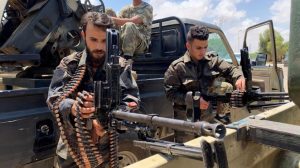 Libyan National Army (LNA) commander Khalifa Haftar said that the fight against Turkish aggression will not stop as a battle loomed on the horizon in Sirte amid ongoing reinforcements by the Government of National Accord, led by Fayez al-Sarraj, like reported by aawsat.com.

In a speech at the Military College in the city of Tocra, Haftar said that international quests for a political and fair settlement shouldn’t be exploited for bringing invaders and mercenaries in addition to reinforcing the enemy’s capabilities.

Haftar further hailed friendly and brotherly states, mainly the UAE and Egypt, that support the Libyans and the armed forces against Turkish greed.

His speech came as pro-Sarraj local media reported new military reinforcements were sent to the forces of the Turkey-backed GNA in locations near Sirte.

Minister of State for the Middle East and North Africa James Cleverly said “the UK is deeply concerned at the ongoing conflict, fueled by reckless international interventions, and the unacceptable humanitarian and human rights cost.”

“It is shocking that the World Health Organization ranked Libya first in the world, ahead of Afghanistan and Syria, in numbers of attacks on health facilities and staff from January to May 2020,” he said.

US Permanent Representative Kelly Kraft also stressed that there is no place for foreign mercenaries or proxy agents, especially forces fighting on behalf of Russia.

Kraft expressed concern about what is going on in the cities of Sirte and Jafra close to the Libyan Oil Crescent, and stressed having reports that weapons and mines are transferred to Libyan areas for control, in clear violation of Libyan sovereignty.

“It is more urgent than ever that foreign interferences in the Libyan conflict cease,” France’s UN ambassador Nicolas de Riviere said.

“The risks of regional escalation and a “Syrianization” of Libya are real. Despite the relative calm and the stabilization of the front line on the Sirte-Joufra axis, the continued military reinforcement of both camps is worrying,” he added.