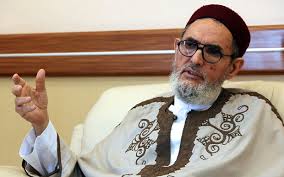 Sheikh Sadek Al-Ghariani, still accepted by the regime in Tripoli as Libya’s grand mufti, has said that unless the Libya Dialogue agreement accepts Sharia law and has it at the top of the text then it is invalid.

He was speaking to gread applause at a workshop on the UN-brokered Dialogue held today at the General National Congress (GNC). When he arrived to speak, many participants started shouting takbirs (“Allahu Akbar”).

(The Dialogue text in fact says in its preamble that “and that Islamic law (Sharia) is the source of legislation”. However, for Ghariani, who has resolutely opposed the Dialogue until now, nothing less than Sharia being the law, rather than its source, will do.)

The workshop was attended by some 100 key players in the Tripoli regime, including its prime minister, Khalifa Ghwell, members of the GNC, elders and municipal representatives together with other opponents of the House of Representatives (HoR).

None of the GNC’s Dialogue team was in attendance having already left for New York.

Some members of the GNC supported the Dialogue, expressing optimism as to its prospect. Others did not, insisting that the Supreme Court’s ruling last November which they say abolished the HoR and reinstated the GNC had to be accepted.

Abdulraouf Al-Manaie (elected to the HoR for Abu Sleem), when referred to as an HoR boycotter, said he was no not because it no longer existed and therefore he could no longer be a member of it.

In his speech, Ghwell said that the Dialogue was incompatible with the GNC and expressed his absolute opposition to the GNC delegates to the Dialogue continuing to have anything to do with it. He accused them of ignoring what he called “putchists” and “criminal gangs” – a reference to the Libyan National Army and Khalifa Hafter – who had bombed Benghazi, Derna and Kufra “and killed innocent elderly people, women and children”. Claiming to support dialogue, he said it could only be between Libyans who supported the 17 February Revolution.