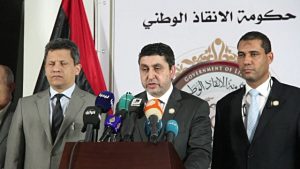 Local Libya sources said that prime minister of the self-declared government in Tripoli Khalifa Ghweil received a leg injury during fierce battles over the last three days, like reported by aawsat.com.

The internationally-backed government headed by Prime Minister Fayez al Sarraj has been fighting off Ghweil loyalists.

Pro-Sarraj forces stormed into a Tripoli complex that Ghweil was based in, with sources telling Asharq Al-Awsat that the self-appointed Tripoli prime minister remains within capital grounds and has not fled as many had reported.

They said that Ghweil has not yet lost control over vast urban areas.

Government forces launched an assault on his headquarters in the Guest Palace, a complex of luxury villas in the city center, and overran it after heavy fighting.

By losing his Tripoli headquarters, Ghweil has lost one of his key strongholds in the capital.

As clashes intensified, Sarraj was forced to delay a planned visit to Sudan on Wednesday “because of security conditions” in restive Tripoli.

The capital has seen exchanges of rocket and artillery fire between unity government forces and a militia loyal to Ghweil.

Ghweil accused Sarraj of receiving Italian intelligence support, arguing once again that his self-styled government is the sole eligible and “legitimate authority” in the country.

In a Wednesday press statement, Ghweil said that his troops “withdrew voluntarily from a part of their Tripoli headquarters.”

Since taking power from Ghweil’s administration in March 2016, the Government of National Accord has secured the backing of powerful militias in the capital, but some districts remain outside its control.