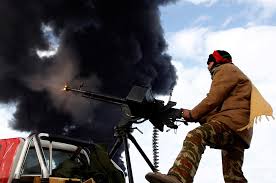 The potential chaos highlighted by a 2011 Council on Foreign Relations (CFR) Contingency Planning Memorandum, “Post-Qaddafi Instability in Libya,” has come to fruition. Libya today is in the midst of a civil war—one as confusing as it is ferocious. Atrocities against civilians are mounting. The collapse of the Libyan state and the country’s division is possible. This could threaten Libya’s remaining oil and gas production and spark new waves of migration to Europe and neighboring countries in North Africa.

Libya’s transitional road map fell apart in 2012, as the elected parliament and several subsequent governments failed to demobilize, disarm, and reintegrate revolutionary brigades that had fought against the Qaddafi regime. As a result, the brigades aligned with political factions and began to fight each other, killing thousands of Libyans, internally displacing about 400,000 people, and creating a refugee population of one to two million abroad.

The conflict pits the Dawn coalition, which controls Tripoli and much of western Libya, against the Dignity coalition, which controls parts of Cyrenaica in the east, in particular Beida and Tobruk, as well as parts of Benghazi. But the geographical division is not neat: combatants from Zintan in the west are an important component of the Dignity coalition while Dawn claims the loyalty of some fighters in the east.

Each coalition has its own self-declared parliament and government, as well as nominal military chiefs. Although the press often associates Dawn with Islamists and Dignity with non-Islamists, both groups have Islamist and non-Islamist support, and the Finance Ministry in Tripoli continues to pay combatants in both coalitions. Egypt and the United Arab Emirates (UAE) provide substantial aid to Dignity, including occasional air strikes on its behalf. Most other countries regard the Dignity-affiliated Beida/Tobruk government as legitimate but want to see a negotiated political settlement. A United Nations (UN) proposal for a national unity government would reinstall the Dignity-affiliated parliament in Tripoli along with a mostly Dawn-affiliate consultative body, but it is still unclear whether either Dawn or Dignity will accept the proposal.

In addition to the Dawn and Dignity coalitions, a growing presence of jihadists (especially in Derna and Sirte) greatly complicates the situation. Extremists associated with Ansar al-Sharia and the self-declared Islamic State regard both Dignity and Dawn as enemies.

Libya is particularly important for the United States’ European Union (EU) allies, both as a gas and oil supplier and as a source of illegal migrants (Libyan and non-Libyan), who are crossing the Mediterranean in unprecedented numbers. As for others in the region, Egypt and Tunisia are hosting large numbers of Libyans, straining their already struggling economies and limited social services. Tuareg fighters returning from Libya have contributed to the ongoing secessionist strife in northern Mali.

An escalation of the fighting in Libya will likely result in further radicalization, risking partition and even complete state collapse, with consequences across North Africa and Europe. Were it not for the even greater chaos in Iraq, Syria, and Yemen, where the Islamic State and al-Qaeda-linked forces are more prominent, the United States would be more concerned about the potential for Libya to provide safe haven to international terrorists. Also at risk is Libya’s remaining oil production of several hundred thousand barrels per day, as well as its gas supply to Europe, which will be important next winter if Russia cuts off supply to Ukraine, through which most of Europe’s Russian supplies of gas flows. UN efforts at a political settlement will be fruitless without strong backing from its members, including support for the peacekeeping forces required to protect a national unity government and restore law and order in major population centers. In the absence of a political settlement, possible scenarios include a win for Dignity, backed by Egypt and the UAE, or fragmentation of the country. A Dignity win would create serious risks of retributive violence, including attacks against civilians. Fragmentation could also further escalate violence, since substantial oil and gas resources would be at stake. While a settlement is being negotiated, local stabilization efforts could relieve parts of Libya from violence, but on the national level it could take time and a great deal of effort.

As European interests in Libya overshadow those of the United States, the EU should take the lead in helping the country out of its current predicament. Arab countries—including Egypt and the UAE, as well as the more neutral Algeria and Morocco—should also make substantial contributions. Washington’s role should be one of encouraging and facilitating UN, EU, and Arab efforts, rather than undertaking a major new initiative.