You are here: Home / Mediterranean / Libya’s anarchy might deepen migrant crisis in Europe 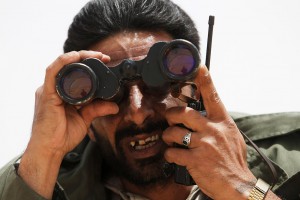 As a civil war raging throughout Libya, the now anarchic North African country has become a focal transit point for illegal immigrants eyeing for Europe, and that might deepen the current migrant crisis, analysts warned on Sunday, after a series of shipwrecks claiming hundreds of lives.

Nearly 200 illegal immigrants are feared dead off Libya’s western Zuwara coast Thursday after a boat overcrowded with 400 people sank en route to Italy. 82 bodies have washed ashore, while around 100 people are missing as Libyan coast guards still searching for bodies and potential survivors.

“So many lives, so many young people, so much hope lost at sea.” Leon said.

Despite the great global concern, such life-sucking shipwrecks are seen as daily occurrences off Libya’s coastal cities.

Libyan official news agency LANA reported that on July 17 alone, around 2,700 illegal immigrants have been rescued off the Libyan coast as they were attempting to reach European coasts.

Some migrants pay thousands of U.S. dollars for the land and sea passage with smugglers. The migrant ships, most in poor conditions, with no sufficient food and water, sounded distress signal right after they entered the international waters and waited for rescue team from European countries, a diplomatic source who decline to disclose his name told Xinhua.

He added the migrants risked their lives for the mere hope they would be saved and transported to Europe and start a better life.

According to a UN report, around 170,000 illegal immigrants crossed the Mediterranean into Italy in 2014. Among them, 85 percent started their journey from Libya. The stowaways are mainly from Southern Sahara, and some are from Pakistan, Morocco, Syria, and Iraq.

Mansur Al-Shokri, professor of political sciences in Tripoli University, blamed the failed political process for the migrant crisis. He said after the downfall former leader Muammar Gaddafi has left Libya with a security vacuum, the lawless country has become an “ideal” place for the migrants,

The once oil-rich country is now juggling two rival parliaments and governments, with Tripoli controlled by Islamist-backed Libya Dawn forces, and the internationally recognized government operating in the eastern town of Tobruk.

Shokri said the clashes between different factions clearly shred the country into pieces since the demise of the former strong central government, and therefore, it’s nearly impossible to set concentrate forces to protect the borders.

“Apparently, all Libyan borders are now unsecured due to a lack of security measures. Many immigrants come from southern African Sahara and some neighboring Arab countries.” Shokri said.

The EU earlier in May had asked a UN mandate permitting military force to halt illegal immigration from the country following some tragedies on the Mediterranean that drowned a total of 750 migrants. The proposal was later rejected by UN.